Rewind 2015: A month-by-month recap of what the year was about for Pakistan

Rewind 2015: A month-by-month recap of what the year was about for Pakistan

A look at the images that define­d 2015 for Pakist­an
By Ferya Ilyas / Creative: Maryam Rashid
Published: December 27, 2015
Tweet Email 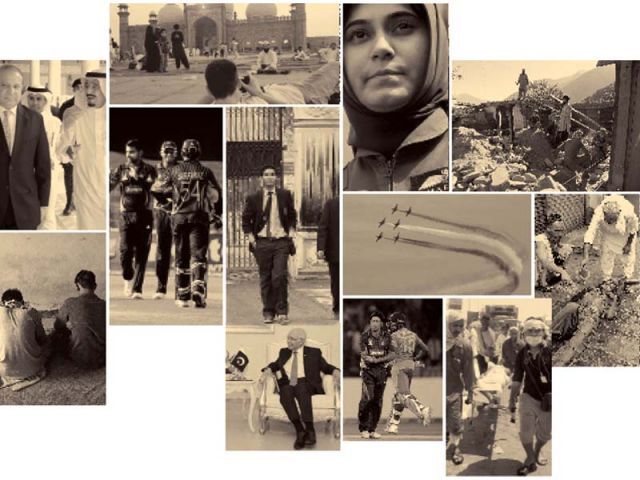 The year 2015 was a mixed bag for Pakistan. Of same olds and brand news, of strange events and usual happenings, of great highs and shocking lows. And as the year comes to a close, let’s take a look at the images that defined 2015 for the country. Survivors of the Taliban’s December 16, 2014, massacre returned to Army Public School after an extended winter recess, with bruises and memories of the butchery still fresh. The army chief and his wife welcomed students and their parents as they walked around the building which saw the killing of 147 people, mostly students, in a revenge attack. Many ran across the school premises showing parents and friends where they hid to escape the attack and where their classmates succumbed to bullet wounds, while some stood in silence at a memorial set up to honour the victims.

Mother of all matches Pakistani players, led by Misbahul Haq, walk into the ground for the highly anticipated match of the World Cup. PHOTO: AFP

With tickets sold in 12 minutes — months ahead of the match — and the Star Sports’ ‘Mauka Mauka’ campaign upping the ante, the ground was set for thousands of fans getting ready for the high-octane Pakistan-India World Cup match. Carrying the weight of history, Team Green went into the clash with hopes of breaking the record of five consecutive World Cup losses against India. But alas, some things don’t change. Virat Kohli’s magnificent century lifted his team to an imposing 300 for seven — a target too hefty for Pakistan whose most successful World Cup chase is 262 against New Zealand in 1992. Abandoned for seven years due to security threats, the Pakistan Day parade was organised in the capital to show off the military prowess of a country fighting domestic militants and external threats. Political and military leaders alongside a large number of civilians attended the pageantry of gun salutes, aerobatics, skydiving and speeches. Spectators clapped and waved flags as cohorts of security personnel, cultural floats, tanks and missiles roamed the Parade Ground near Shakarparian Hills amid tight security. Female officials of the Pakistan Army made their debut at the parade which also featured a homemade killer drone and flypasts by fighter jets. After days of intense debate in Parliament, political leaders unanimously decided to stay neutral in the Saudi-Yemen conflict. The royal kingdom had been bombing Houthis in Yemen since March and wanted Pakistan to join the campaign which sought to preserve Sunni control of the neighbour against Zaidi Shias supported by Iran. Embroiled in its own war against domestic militants and tensions with India, Pakistani leaders agreed the military had too much on its plate and should stay out of the Arab battle which had the potential of stoking sectarian violence in Pakistan. Though the parliamentary resolution reaffirmed close ties with Saudi Arabia, the ‘no’ vote meant upsetting one of Pakistan’s biggest financiers. Zimbabwean batsmen Sikandar Raza (L) and Vusi Sibanda (R) run between the wickets as Pakistani bowler Mohammad Sami (C) looks on during the first one day international cricket match between Pakistan and Zimbabwe at the Gaddafi Cricket Stadium in Lahore on May 26, 2015. PHOTO: AFP

The cricket-crazy nation waited for six long years and, at last, they arrived; an international team to play in Pakistan since the 2009 gun attack on the Sri Lankan squad. Zimbabwe may have lost the series of T20s and ODIs, but won hearts across Pakistan for shunning doubts and ending the country’s cricketing exile. The lack of international cricket in Pakistan not only deprived young players of the home advantage and fans the thrill of a live match, but also caused financial losses amounting to $120 million. The Gaddafi Stadium roared again, this time cheering for both teams because it was more than just a cricket series. A man cools off under a public tap in Karachi. PHOTO: REUTERS

Soaring temperatures coupled with power outages and changes in eating habits due to Ramazan led to the death of 2,000 people in Sindh, mostly in the provincial capital of Karachi. The mercury shot up to 45°C in the metropolitan where hospitals and graveyards ran out of space to keep bodies and authorities wondered what went wrong. The most vulnerable — poor, elderly and sick — suffered the hardest as the city sizzled under the unforgiving heat, while the incompetent provincial government remained indifferent to the unfolding disaster, looking for scapegoats to dodge responsibility. More than the heat, many believe, the poor infrastructure of the city was responsible for the high number of fatalities. Brandon Stanton of Humans of New York (HONY) arrived in Pakistan on the third day of Eid. However, people only got to know about it after he had left. The internet celebrity travelled to Hunza, Lahore and Karachi in search of stories that don’t make it to CNN or Fox News. He tried, in his limited capacity, to break stereotypes about Pakistan, which unfortunately in the West is sometimes known as the terror capital of the world. While each photo told a remarkable story, what was more heart-warming were the positive comments that flooded his Facebook page. Cherry on the top: HONY started a fundraising campaign for an activist fighting bonded labour in Pakistan and surpassed the goal by 2,343% (as of December). Only when you think Pakistan has witnessed the worst of the worst, there comes a story which shakes the country to its core yet again. The discovery of a child porn ring in Hussain Khanwala village, Kasur district, Punjab was one such event. More than 280 children were allegedly molested on tape for the last seven years by a gang of 25 men who would sell these videos for as cheap as Rs50 each and also use them to blackmail the families of the abused. The scandal came to light when parents decided to protest against the police who refused to take action against the culprits. Though a Joint Investigation Team later claimed the number of victims was greatly exxaguerated, the scandal brought to light one of Pakistan’s darkest moments. Over 2,500 pilgrims, including more than 100 Pakistanis, were killed in two accidents during Hajj this year. On September 11, more than a hundred worshippers were killed when a crawler crane crashed into Makkah’s Grand Mosque and another 2,400 pilgrims lost their lives on September 24 in a Hajj crowd collapse in Mina near Jamaraat Bridge. Though the exact cause of the second accident is disputed, Saudi officials say the crowd collapse happened when two large groups of pilgrims intersected at the same street from different directions. With the Syrian crisis, Middle East respiratory syndrome threat and Yemen war in the backdrop, the Mecca tragedy led to harsh criticism of Saudi Arabia’s handling of the pilgrimage, with Iran at the forefront of the opposition. The Grand Mufti, however, characterised the incident as ‘inevitable’, ‘fate’ and ‘beyond human control’.

October: Earthquake in the north Earthquake survivors gather in front of their damaged house in Kesu village, some 15kms from Chitral, on October 28, 2015. PHOTO: AFP

A decade after the 2005 Kashmir earthquake killed over 80,000 people, the land shook again. With its epicenter in Afghanistan, the tremor left around 300 dead and 2,000 injured in Pakistan. Despite being a 7.5 magnitude earthquake, the destruction was relatively less due to the depth of the seismic activity — 212.5km below the ground compared to 15km in 2005. Tremors were felt in Nepal, Uzbekistan, Turkmenistan, Tajikistan and Kyrgyzstan, with casualties reported in Afghanistan and India. In Pakistan, the worst affected areas were in the Gilgit-Baltistan region and Khyber-Pakhtunkhwa province where many buildings collapsed and roads were blocked by landslides. Marium Mukhtiar, the country’s first female fighter pilot to die on duty, was killed after an in-flight emergency forced her to eject from her aircraft. According to Pakistan Air Force (PAF), Mukhtiar died because she was forced to eject at low altitude. The flying officer was losing height but stayed in the aircraft in order to clear a populated area in Punjab, PAF said. Her co-pilot squadron leader Saqib Abbasi survived because he managed to eject seconds earlier. PAF had been recruiting women since 2003 and in 2006 a batch of seven females became fighter pilots. Currently, 30 women are part of the PAF.

Of friends and foes Pakistan-India relations have always been erratic, but 2015 saw some strange developments. Nawaz Sharif and Narendra Modi maintained a cordial bond whenever they met on the sidelines of various international events or during phone calls. But back home, officials of both countries resorted to harsh criticism and blamed the other for no progress on peace talks. The border fight escalated and the war of words only turned more intense. But at last, an encounter in Paris and a secret meeting in Bangkok convinced Pakistan and India to give up their child-like stubbornness and move ahead for the sake of millions.

Correction: Marium Mukhtiar was called ‘the country’s first female fighter pilot’ in the print version of this article. The error is regretted and has been fixed online.

Ferya Ilyas is a senior subeditor at The Express Tribune. She tweets @ ferya_ilyas