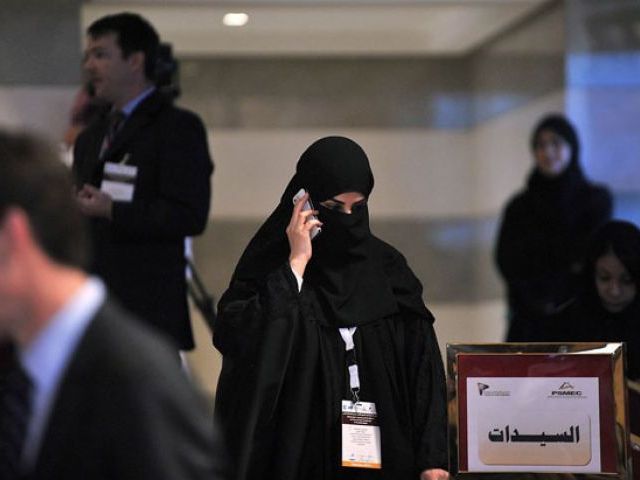 RIYADH: Voting began on Saturday in Saudi Arabia’s first elections open to female voters and candidates, a tentative step towards easing restrictions that are among the world’s tightest on women.

Male voters began to enter a polling centre in central Riyadh at about 8:00am, an AFP reporter at the scene said.

First time ever: Saudi women can now register to vote

Men and women vote separately in the kingdom, where the sexes are strictly segregated.

Fewer than 10 men had arrived to cast early ballots at the centre visited by AFP.

After checking their names on sheets of paper hanging on the wall and verifying their eligibility with elections staff, each voter made his choice on a ballot paper which he dropped into a transparent box.

The absolute Islamic monarchy, where women are banned from driving and must cover themselves from head-to-toe in public, is the last country where only men were allowed to vote.

Earlier, online taxi-hailing service Uber announced it will give Saudi Arabian women lifts to polling stations for free on Saturday to help boost female participation at the first elections in the deeply conservative Islamic kingdom open to female voters.

Saudi Arabian women are both running for election and voting for the first time in local elections in what is viewed as a pigeon step towards gender equality in the autocratic nation where women are still legally barred from driving.

The free service to take women to vote is a joint effort between US-based tech company Uber and Al-Nahda Philanthropic Society for Women, a Saudi women’s empowerment group.

Uber has proved popular with women in the wealthy desert state to get around amid limited public transportation and general unease about the safety of taxis, said Al-Nahda’s Chief Executive Rasha Alturki.

“We needed to play a role because we found this really empowering to women,” she told the Thomson Reuters Foundation. “With regards to Uber itself … it’s good for our cause because it helps women get out and vote.”

The initiative is part of a wider campaign by Al-Nahda to get Saudi women to vote and to campaign for gender equality.

Saudi Arabia is the only country that bars women from driving and requires them to have a male “guardian” who can stop them traveling, marrying, working and from some medical procedures.

The election is for 284 municipal councils with more than 900 women registered as candidates. The pledge to allow women to take part was made by the late Saudi King Abdullah bin Abdulaziz in response to the Arab spring.

“All cars will be available tomorrow,” said Abdellatif.

They are up against nearly 6,000 men competing for places on 284 councils whose powers are restricted to local affairs including responsibility for streets, public gardens and rubbish collection.

Gender segregation enforced at public facilities meant that female candidates could not directly meet the majority of voters — men — during their campaigns.

Women also said voter registration was hindered by bureaucratic obstacles, a lack of awareness of the process and its significance, and the fact that women could not drive themselves to sign up.

As a result, less than one in 10 voters are women and few, if any, female candidates are expected to win.

But one-third of council seats are appointed by the municipal affairs ministry, leaving women optimistic that they will at least be assigned some of them.

But win or lose, the female contenders say they are already victorious. “To tell you the truth, I’m not running to win,” said Amal Badreldin al-Sawari, 60, a paediatrician in central Riyadh.

“I think I have done the winning by running.” She said she became a candidate out of patriotism and because Islam gives women rights.

“Men and women have equal rights in many things,” she said, reciting a relevant verse from the Koran, and adding that everyone she encountered was supportive of her campaign.

Aljazi al-Hossaini waged her 12-day campaign largely over the Internet, putting her manifesto on her website where both men and women could see it.

Women register to run for election in Saudi first

“I did my best, and I did everything by myself,” said the 57-year-old management consultant, running in the Diriyah area on the edge of Riyadh. “I’m proud of myself that I can do it.”

But not all women trying to break the mould in the conservative kingdom had such a positive experience.

As campaigning began last month, three activists said they had been disqualified from running.

They included Loujain Hathloul, who spent more than two months in jail after trying to drive into the kingdom from the United Arab Emirates late last year, in a case that attracted worldwide attention.

An appeals committee reversed her disqualification just two days before the end of campaigning, Hathloul said on Twitter. “That is not fair,” she said.

Nassima al-Sadah, a human rights activist in the Gulf coast city of Qatif, told AFP she had begun legal action over her own disqualification.

And a resident of northeastern Saudi Arabia, who asked not to be named, said the female candidate she wanted to vote for withdrew after local Islamic scholars objected.

Voters say tribal loyalties in the male-dominated society are a big factor in the ballot.

According to election commission data, nearly 1.5 million people aged 18 and over are registered to vote.

This includes about 119,000 women, out of a total native Saudi population of almost 21 million.

But women still face many restrictions, and must get permission from male family members to travel, work or marry.

Ruled by the al-Saud family of King Salman, Saudi Arabia has no elected legislature and faces intense Western scrutiny of its rights record.

A slow expansion of women’s rights began under Salman’s predecessor Abdullah who announced four years ago that women would join the elections this year.

The kingdom’s first municipal ballot was in 2005, for men only. Polls close at 5:00pm, with counting on Sunday.

Saudi Prince Alwaleed calls Trump a disgrace to US, asks him to quit presidential race