Shamim Hanfi from India says he is not suited to speak on ‘Nifaze Urdu, Imkana­at or Masail’
By Our Correspondent / Photo: Athar Khan
Published: December 9, 2015
Tweet Email 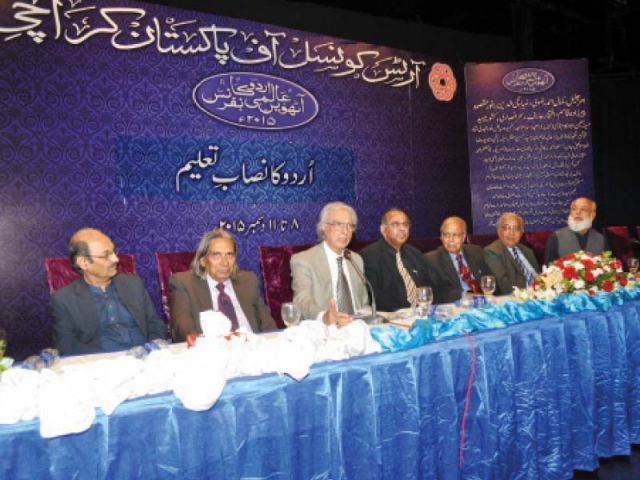 Panelists on the first day of the 8th International Urdu Conference discussed the importance of promoting Urdu, its consequences and the obstacles being faced in its development. PHOTO: ATHAR KHAN/EXPRESS

KARACHI: The four-day Eighth International Urdu Conference kicked off at the Karachi Arts Council on Tuesday, with its first session devoted to ‘Nifaze Urdu, Imkanaat or Masail [Implementation of Urdu, possibilities and problems]’.

The Arts Council auditorium was packed to capacity as literati from Pakistan and abroad gathered at the inaugural session. Conducting the programme, Dr Huma Mir introduced the presidium, which included Zehra Nigah as the keynote speaker, to the audience. The conference is being held annually since 2008. This year’s programme will continue for four days

Among foreign delegates, Shamim Hanfi from India was the first to address the audience. But he said that he can not relate to the subject of the first session. “I am not suited to speak on it,” he said. “It is the right of others, not mine.”

Instead, he expressed his thoughts on the language that actually developed in the piece of land that he belonged to. He said that much like Hindi, Urdu had an undefined territory and relating it to the Muslims of India alone will not be fair.

Discussing the past in which Urdu flourished, he asked others to see what progress the language made in a century.

Critic and poet Professor Sehar Ansari said that there are at least 56 languages spoken across the country, 16 of which have scripts and rules made. He stressed the need of working on the rest of the languages.

He said that though Urdu was the constitutionally notified national language of the country in 1973, but it was never implemented owing to some undefined reasons. Urdu as a national language did not mean that the other languages had no significance, he added. He asserted that there should be a translation board on the provincial level across the country.