OPINION Once upon a time in America

The new Lady and the Tramp will be released exclusively on Disney Plus on November 12, 2019. PHOTO: IMDb

Lady and the Tramp: Another lazy, opportunistic adaptation

Disney seems increasingly uninspired and creatively vacant, relying on the powers of nostalgia to draw in an audience.
Sameen Amer August 29, 2019
Disney may be raking in billions of dollars with its live-action remakes of animated classic movies, but this string of lazy, opportunistic adaptations isn’t doing much for the company’s image. While these projects have displayed the company’s visual wizardry, the media giant has yet to produce a new iteration that was truly essential.

With each unnecessary revisit, Disney seems increasingly uninspired and creatively vacant, reliant primarily on the powers of nostalgia to draw in an audience. This year has already seen the release of three such ventures — Dumbo, Aladdin, and The Lion King — none of which have generated particularly favourable reviews. Undeterred, the studio has now unveiled the trailer for Lady and the Tramp, which is slated of be its fourth remake of an animated film this year.

Set to be available for streaming on Disney Plus, when the service launches later this year, Lady and the Tramp will be the first Disney remake to not be released in cinemas, and to be fair, streaming does seem like a better platform for such projects than the big screen. Disney Plus, which launches on November 12, 2019, will come fully loaded with all of Disney's animated films, a few new releases such as Lady and the Tramp and a Star Wars TV show.

The new version retells the tale that was previously told in the 1955 animated musical. At the centre of the film, there is a refined female American cocker spaniel, Lady, and a male stray mutt, Tramp, who embark on an adventure and fall in love with each other.

The real dogs portraying these two main characters — Rose and Monte respectively — are adorable, and bring a real-life, feel-good story with them. Apparently, Monte was rescued from a kill-shelter and eventually adopted by one of the film’s animal trainers, almost mirroring parts of Tramp’s story. But beyond this charming tale and the inherent adorableness of the pups, there isn’t much that is particularly exciting about the prospect of yet another Disney reboot. Since one of the criticisms of The Lion King was that the animals, because they were so realistic looking, could not emote as their animated counterparts, it remains to be seen if the dogs and cats in Lady and the Tramp will suffer from a similar problem. 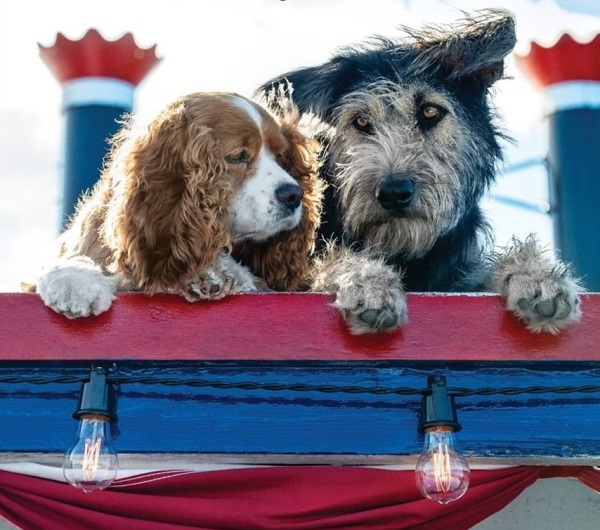 Also, instead of hiring trained voice actors, the filmmakers are yet again using Hollywood stars — Justin Theroux and Tessa Thompson (neither of whom seem to have particularly striking or emotive voices) — to deliver the vocals for Tramp and Lady respectively. The movie also features Kiersey Clemons, Thomas Mann, Yvette Nicole Brown, Ken Jeong, and F Murray Abraham in live-action roles, while Sam Elliott, Ashley Jensen, and Janelle Monáe round up the voice cast.

Sure the iconic spaghetti scene will make a reappearance, and yes, the terrific Monáe, who plays the pooch Peg, will perform two new songs for the movie, but from the looks of it, this adaptation, like its predecessors, is likely to leave us yearning for something fresh instead.

Disney clearly has dazzling visual technology and amazingly talented animators. It’s just sad that they aren’t using this enviable pool of resources on original projects that can bring something exciting and inventive to cinema. Disney needs to be re-established as a trailblazer instead of just a cash-grabbing behemoth hell-bent on sucking the joy out of classics for its financial gain.

The new Lady and the Tramp will be released exclusively on Disney Plus on November 12, 2019.

WRITTEN BY:
Sameen Amer The author is a Lahore-based freelance writer and critic. She tweets as @Sameen (https://twitter.com/Sameen)
The views expressed by the writer and the reader comments do not necassarily reflect the views and policies of the Express Tribune.

El Camino is nothing more than an extended Breaking Bad episode

Will El Camino do justice to the Breaking Bad saga?

The Rhythm Section: Are you ready to see Blake Lively kick some butt