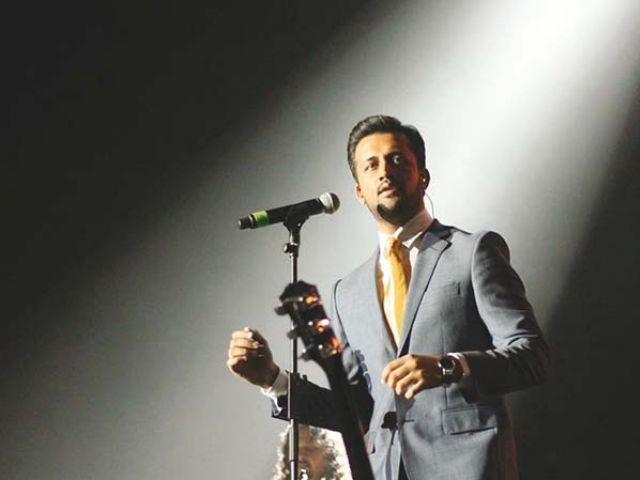 Atif is currently in the middle of a tour that started in the United States, performing in Singapore, India and Karachi before he returned to the US. PHOTO: PUBLICITY

Love him or hate him but you can’t ignore how Atif Aslam came, saw and conquered the Pakistani music industry, even crossing borders and taking Bollywood by storm. Even if you weren’t a fan of his rendition of the Sabri brothers’ classic Tajdar-e-Haram on the latest season of Coke Studio, it got a nod of approval from none other than Amjad Sabri himself. As he lends his vocals to his first track for a Pakistani film in four years, The Express Tribune catches up with the singer who shot to fame in 2004 with the timeless Aadat.

Fast forward to now, he has released the music video for Dilkare from the soundtrack of upcoming film Ho Mann Jahaan. Perhaps the video is not what most people would expect from Atif as an artist, most of whose videos centre on him. “Asim Raza told me about the video and I liked the idea because we wanted to move away from my typical videos where I’m [usually] depicted as a star surrounded by paparazzi,” he says. “We wanted to go in complete contrast with that.”

The video combines shots of Atif’s travels through scenic Chitral with a few unseen scenes from the film, which showcase poignant developments in the characters’ lives. For those wondering why there are so many shots of Atif in the video, this is his way of extending support to the film.

The song has been penned by Asim and composed by Atif and Sarmad Ghafoor. “It’s along the lines of Aadat when I composed it,” he says. “For me, it brings nostalgia and a lot of feelings related to not only love but also the things that one wants to achieve in life. Even if you can’t achieve them, one has to move on.”

Atif has been working in India for a number of years and bagged acclaim from the industry and fans alike. “Our music is entirely different from Bollywood music and I can clearly distinguish between them,” he states. While India has musical talent of its own, there is no doubt that for a certain kind of sound and melody, it has to look to Pakistan. “We have different tastes in music composition, and playback singing has just revived in Pakistan. If we go against item numbers, we can produce much better music than Bollywood,” he holds.

He is gearing up for playback singing stints both in his homebase and across the border while also for releasing singles. “For my upcoming songs, I will revisit the Jal Pari era.” He also hints there will be a change in the theme of his songs. “One thing I want to deviate from is love songs. There have been too many of those lately.”

Churning out an album is not on the cards at the moment as he reveals, “Digital rights and copyrights will take time to be set up in Pakistan and till then artists aren’t able to make money the way they used to from albums.” Atif is currently in the middle of a tour that started in the United States, performing in Singapore, India and Karachi before he returned to the US. “I’ve done 13 shows in 17 days,” he shares.

When the icon returned to Karachi

After a long hiatus, music came back to life in the metropolis when Atif Aslam performed for a crowd of 7,000 attendees at the Pakistan Air Force Museum this week.

“Given the security situation in the past, it had become difficult to perform in what we once called the City of Lights, I feel overwhelmed to be standing here right now and performing in front of you all,” Atif said, addressing the alumni and current students of Iqra University. Waiting anxiously for the singer’s recent Coke Studio track, Tajdaar-e-Haram, the crowd was taken down the memory lane as Atif opened the set list with one his earliest songs, Wo Lamhe.

The evening continued with his band playing along to a combination of his recent and old tracks. Though the singer was scheduled to perform for 45 minutes only, he stretched the show to two hours, saying, “Performing in front of this wonderful crowd tonight has made me relive the days when Karachi was known for its enthusiasm and an appetite for entertainment.”

‘Phaijal’ to take Netflix by storm