'When a pilot embraces martyrdom, you only find ashes'

'When a pilot embraces martyrdom, you only find ashes'

Father recall­s words of PAF pilot as she was laid to rest on Wednes­day
By Faraz Khan
Published: November 25, 2015
Tweet Email 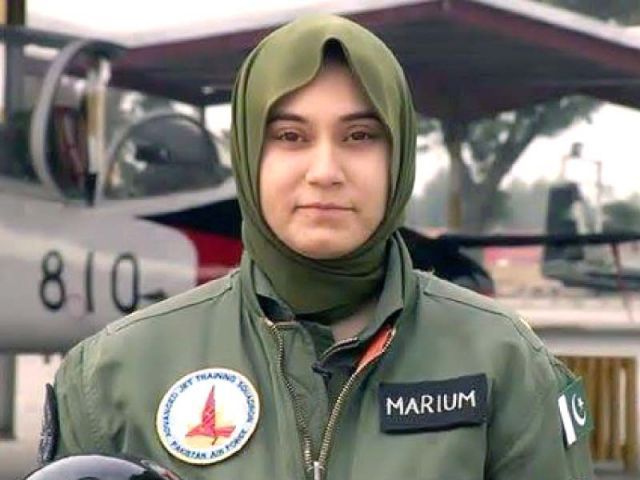 KARACHI: “When a pilot embraces martyrdom, you only find the ashes, not the pilot,” these were one of the last words that pilot Marium Mukhtiar said to her father a day before she died on Tuesday.

The Pakistan Air Force (PAF) flying officer was telling her father over the phone that she had finally become a pilot when she said these words. Two days later, the grieving father recalled these words next to her final resting place.

Marium’s father, Colonel (retd) Mukhtiar Ahmed, was employed with the armed forces and recalls her to be a brave child. After she graduated from NED University, she expressed her wish to join the armed forces as a GD pilot, he said. Since he had worked in the armed forces, Ahmed knew it would not be easy and told his daughter as much. Resilient as she was, Marium refused to back down and eventually her father gave in.

“I had told her from the start that I would not apply any source or coercion to help in her career but she proved her mettle and managed to achieve her goal of becoming a pilot on her own,” Ahmed told The Express Tribune.

Even as they buried her, the family was proud the 24-year-old girl sacrificed her life for the country. “I always asked her to become a hero,” her mother, Rehana, recalled. “She always told me that she could not become a hero but she can become a ‘heroine’, she added.

Marium is the first PAF flying officer to have died during a mission. Her trainer jet, FT-7PG aircraft, crashed near Kundian, Mianwali, on Tuesday afternoon. Squadron Leader Saqib Abbasi, who was on the same flight, suffered injuries in the accident.

Earlier, her funeral prayers were also offered at Faisal Air Base after her flag-draped coffin was flown on a military C-130 plane from Mianwali. The body was received by PAF Air Chief Marshal Sohail Aman and other officers. Squadron Leader Atiqur Rehman led the funeral prayers.

She was laid to rest at the military graveyard in Malir Cantonment. “The nation will never forget Mariums’ great sacrifice,” said Air Chief Marshal Aman. “No one can defeat a nation that has daughters like Marium.”

Corps commander Mukhtar also said that Marium has made everyone proud. “She is an example for the nation’s daughters,” he said.