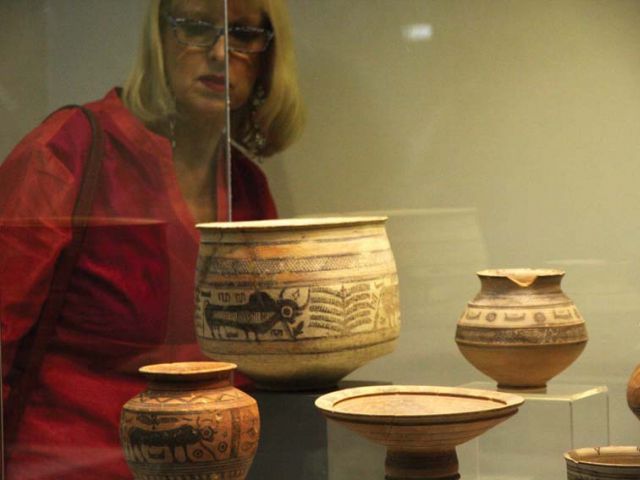 The exhibition showcases a number of ancient earthenware vessels, each of which depicts not only its beauty but also the story of the people who created it. PHOTOS: ATHAR KHAN/ EXPRESS

The National Museum is hosting a collection of clay treasures from Balochistan that were confiscated by Customs officials from smugglers.

Around 140 vessels were exhibited at the ‘Lost and Found — Prehistoric Pottery Treasures from Balochistan’, a joint exhibition organised by the Sindh government, the National Museum of Pakistan, the Museum fur Islamische Kunst in Berlin and the consul-general of the Federal Republic of Germany.

The event was inaugurated by German consul-general Rainer Schmiedchen followed by a musical performance by Ustad Sachu Khan from Dera Bugti, Balochistan.

“The pottery made the trip to Karachi in a peculiar way, as they are a part of a collection that was confiscated by the Pakistani Customs at the port,” said Schmiedchen. “I might want to join the curators of this exhibition in their speeches to the people of Pakistan and abroad to secure the rich social legacy of this locale and to protect it,” he said.

He added that the value of these ancient pieces does not lie solely in their aesthetic value but rather the information they can provide about the people who created them. Special adviser to the Sindh chief minister for culture on tourism Sharmila Farooqi said that the Indus Valley culture is one of Pakistan’s primary social resources.

Pakistan is a great country, with an amazing and diverse heritage, that includes Moen JoDaro, Makli Hills, Bambhore, and Ranikot Fort and others, Farooqi pointed out. She claimed that the exhibition is the first of its kind in Karachi and she feels happy that so many people assembled here to view this remarkable recovery of an almost lost treasure trove.

Each one of the 140 vessels was grouped according to themes, such as ‘Environment: Challenge ad Adaptation’ and ‘Nal Pottery: New Colours and Motifs’, and accompanied by informational text; the exhibition showcases a captivating investigation into the culture of the most ancient civilisation in South Asia.

‘Revival of Suroz’: Audiences get a taste of Balochistan at Lok Virsa festival

Dr Ute Franke, deputy director of the Museum fur Islamische Kunst, said that the Balochistan’s social legacy is that of excellent craftsmanship and magnificence, shown through complicated geometric patterns on clay vessels and hybrid creatures and magical animals that provide a glimpse into a world of fantasy and imagination. The German consul-general added that many of Pakistan’s cultural assets are being threatened by the occupation of land for cultivation, urbanisation and an ever expanding illegal antiquity market. This is valid for Balochistan, as well as for Sindh and Punjab. Yet, because of their creative quality, pottery from Balochistan is considered more valuable than other types of pottery in Pakistan, he claimed.

While taking to The Express Tribune, Dr Franke said that smuggling can be lessened if there are proper laws for the protection of the art and heritage of our countries.

The show will be open for the general public till December 20.