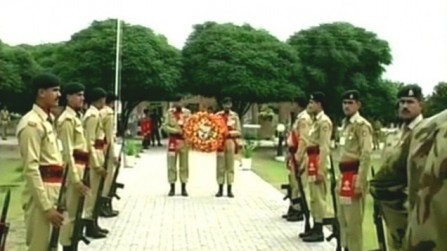 Pakistan Army paid tribute to the brave soldiers who laid their lives in war on terrorism.

ISLAMABAD: Pakistan Army observed Martyrs Day on Friday to pay tribute to the brave soldiers who laid down their lives to protect the country from internal and external threats.

Functions, small and large, were held across the country, while functions at General Headquarters in Rawalpidni and Corps Headquarters in the provinces will be held later.

They laid wreaths at a memorial constructed especially for those soldiers who have laid down their lives in the war on terrorism.

In Dera Ismael Khan, a parade was held to commemorate the fallen.

A large and prestigious ceremony was held in Mingora to pay homage to soldiers who were martyred while eliminating the scourge of militancy from the area.

A large number of school children, senior military officers and relatives of martyrs took part in the ceremony.

This was the first Martyrs Day to be held in Pakistan. The occassion also marks the day a year ago when the Pakistani military moved against militants in Khyber Pakhtunkhwa’s Malakand Division.