As one sectio­n wants the page struck down, anothe­r contin­ues to make more.
By Zarrar Khuhro
Published: January 5, 2011
Tweet Email 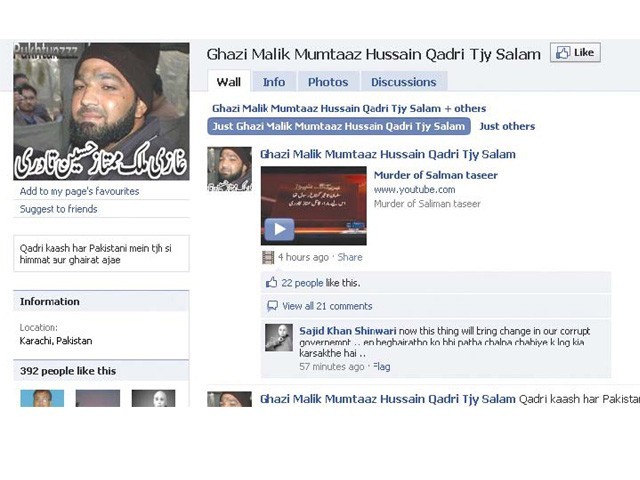 As one section wants the page struck down, another continues to make more.

KARACHI: No sooner had the identity of Salmaan Taseer’s killer been revealed, and his smug grin flashed across all TV channels, a Facebook fan page was set up in support of the man who had murdered the governor of Punjab.

Up until the writing of this piece, there were over 2,000 ‘likes’ for the page that paints this assassin as a hero, a holy warrior and a champion of Islam. The profile text on the page reads as follows: ‘We support the action of Malik Mumtaz Hussain Qadri and want the Supreme Court of Pakistan to take immediate action against his arrest and order to free him.’

However, by midnight, the page had been struck down by Facebook but six other groups had sprung up. A message on a page called Ghazi Malik Mumtaz Hussain Qadri urged people to make groups as many times as others reported it. By the filing of this report, 135 people had already joined the group while 392 people had joined another group.

On the earlier page, except for one or two exceptions, the posts hail Qadri as a ‘ghazi’ (holy warrior), pray for his ascension to heaven and call for others to follow in his footsteps. More than a few of the comments call for President Zardari’s guards to act in the same manner. One poster curses the media for reporting Taseer’s death as if he were a martyr. Interestingly, the same person, whose profile says he is a student in a leading Karachi university, lists his favourite singer as Enrique Iglesias and his favourite movie as Titanic. The posters, most of whom (based on their profile information and language) are either resident or expatriate Pakistanis, are overwhelmingly male and unanimously thrilled at the brutal killing.

Salmaan Taseer’s own facebook status has now been updated to read: ‘R.I.P. Lion of the Punjab Salmaan Taseer (31 May 1944 – 04 Jan 2011)… Innalillahe wa inna ilaihi rajiun’, but what is really striking is what the late Taseer lists as his favourite quote: “How can a man die better than facing fearful odds, for the honour of his country and the temple of his gods”.

Remembering the man: The lesser known side of Salmaan Taseer