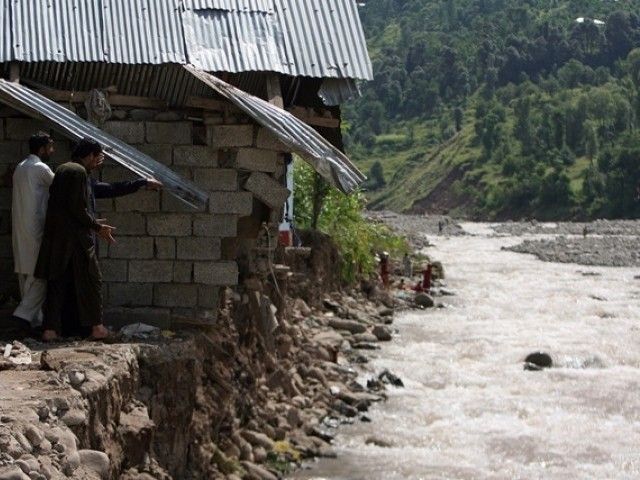 PUNJAB: When flood waters four feet deep inundated this village in southern Pakistan for a month this summer, 80 percent of the 251 thatched houses remained safely above water.

For years, residents of this remote village in the highly flood-prone Layyah district, had seen their homes repeatedly inundated.

Fed up, they finally took matters into their own hands and rebuilt their homes on raised dirt platforms five to six feet (1.5-1.8 metres) high, shored up with eucalyptus trees planted around the edges.

Now risk reduction experts are calling on the government to help more residents of flood-prone areas follow suit, as heavy and irregular rainfall, which experts blame on climate change, increases the vulnerability to flooding of millions of people in Pakistan.

Sandwiched between the Indus and Chenab rivers, Layyah district lies in the south of Punjab province, some 470 miles (750km) southeast of Islamabad, Pakistan’s capital.

Flooding is an annual phenomenon in the district. Last summer, around 226,000 people were affected and crops on more than 41,000 hectares (101,000 acres) were destroyed, according to Pakistan’s National Disaster Management Authority.

But the flood-resilient homes in Sehar, which were mostly rebuilt in late 2010, survived, just as they did during heavy flooding in the three years from 2011 to 2013.

“Even though floods still strike our areas in a more intense and frequent manner, we remain safe,” said Zulekha Hussain, a 34-year-old villager who lives in one of the raised houses.

“We learned from previous floods that the only houses that braved the floods were those built on five- to six-feet-high ground dotted with trees,” said Habibullah Sehar.

The wheat farmer said his house collapsed in floods five times between 2000 and 2010, and each time he was forced to rebuild – until 2010, when he decided to adapt and rebuild his home on a dirt platform five feet above the ground.

He also dotted his land with 350 eucalyptus trees, some planted around the edges of the platform to reinforce it and protect the earth from being washed away.

“I haven’t had to rebuild my home again after the 2010 floods, though the village has suffered four heavy summer floods since 2011,” the 40-year-old said.

Sehar was the first in his village to rebuild in this way, but now over 205 families in the village have followed in his footsteps, and other villages are catching on too.

For the last two years, a steady stream of people have visited from nearby villages to see for themselves the benefits of flood-resilient homes.

“They come and look at the way the homes have been built and inquire in detail about construction techniques. Many villagers from our village also go and help them build these flood-resilient homes,” said Karim Noor, a tomato farmer in Sehar.

Naseer Ahmed, a staff member of the Khushal Foundation, a community-based development organisation in Sahuwala village in Layyah district, said the homes have helped curb the number of flood-hit people leaving Sahuwala.

“Thanks to these new flood-resilient homes, villagers no longer need to migrate out of our village,” he said.

According to Ahmed, more than 890 families in Layyah district have so far rebuilt homes using Sehar’s raised-platform style, and the number is growing.

Farmer Zainab Batool says women in particular feel insecure when they live in makeshift tents often pitched for flood victims by local government or non-governmental organisations. There they face hunger and often feel vulnerable to strangers, she said.

Now, “thanks to the flood-resilient homes, we no longer face this situation,” Batool said.

The remaining families in Sehar plan to rebuild their homes on platforms too, and are deterred only by lack of money.

Habibullah Sehar spent 100,000 rupees (about $950 at today’s exchange rate) to rebuild his house, 10 times the average monthly income in Sehar. Many villagers have sold cattle or a portion of their land in order to help finance the adaptation work.

Disaster risk reduction expert Amjad Mehmood at the Doaba Foundation, a local NGO working in flood-prone districts of Punjab, said self-adaptation measures such as those adopted by the Sehar villagers can inspire others and should be supported by the government.

“Such indigenous knowledge-based measures show how people are already adapting to impacts of climate change to protect their lives. Local disaster management authorities should scale up these community-based adaptation practices through Local Adaptation Plans for Actions,” Mehmood said in an interview.

In a 2015 assessment, the World Resources Institute ranked Pakistan as the fifth most affected country for river flooding, among 164 countries analysed.

The institute estimates that floods affect nearly 715,000 people in Pakistan each year, causing $1.7 billion in economic losses. The U.S.-based think-tank warns that by 2030, river floods could affect 2 million more people in Pakistan, with climate change driving 70 percent of that increase.

“While a big number of people are forced to migrate to safer places in the event of extreme weather events like floods, sustainable homes resilient to floods can help cut post-disaster spending for arranging shelter for displaced flood victims,” said Shafqat Aziz, climate migration and food security specialist at Oxfam Novib, the Dutch affiliate of anti-poverty charity Oxfam.