Climat­e change is presen­ting growin­g threat not just to lives and homes but to cultur­es around the globe
By Reuters
Published: November 9, 2015
Tweet Email 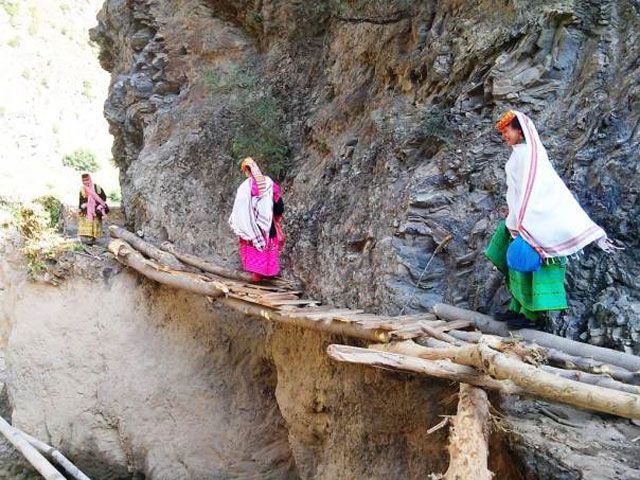 Kalash women in Hindu Kush mountains walk along a makeshift bridge after paths were swept away by torrential rainfall. PHOTO: REUTERS

CHITRAL: For Akram Hussain, unprecedented monsoon floods that drenched his Hindu Kush mountain valley this year were a danger to more than just homes and crops.

His 4,000-strong Kalasha people, who live in three remote valleys in the north-west, preserve an ancient way of life, including animist beliefs, which have led to threats by the Taliban, who call them kafirs, or non-believers. Outsiders, looking for arable land, also have increasingly moved into their high mountain valleys. Now, worsening extreme weather linked to climate change is making efforts to preserve the old ways even harder, the Kalasha say. “Our culture and language were already under threat and now these floods have devastated half our valley,” Hussain said.

Torrential rainfall in July in the district — an area that usually falls outside Pakistan’s monsoon belt — sent floodwater pouring down steep mountainsides, damaging infrastructure in the valleys of Bumburet and Rumbur. Birir, the third valley inhabited by the Kalasha, was spared. The floods damaged tourist hotels, shops and houses near the nullah (mountain stream) on the valley floor and swept away crops of ripe maize and orchards full of fruit trees. “This winter is going to be very difficult for us,” Hussain said.

Around the world, extreme weather and rising seas linked to climate change are presenting a growing threat not just to lives and homes but to cultures, from nomads in the drought-hit Sahel to Pacific Islanders who fear the loss of their entire nations. Descendants of Alexander the Great?

For Kalasha, struggling to preserve their culture is nothing new. They are the last survivors of the people of Kafiristan, who were mostly converted to Islam in the nineteenth century.

Their neighbours across the mountains, in the Afghan province of Nuristan, are the Taliban, who hold sway in parts of that country. Among the Kalasha, prayers are offered during festivities that commemorate the changing seasons. Their elaborate rites demand the sacrifice of dozens of goats, which is becoming increasingly expensive, particularly as crops are destroyed by extreme weather.

“When the livestock comes down for the winter what are we going to feed them? If our livestock goes, our culture goes,” Hussain said. In Bumburet Valley, the Kalasha Cultural Centre, built by the Greek government in 2004, houses an impressive museum of Kalash artefacts, including colourful embroidered clothes, musical instruments, jewellery and wooden sculptures.

Greek interest in the Kalasha stems from the belief that they are descendants of the army of Alexander the Great which marched through these mountains centuries ago. The centre was spared by the floods, thanks to a strong stone wall built around its perimeters. For the most part, the effects of climate change simply compound other problems the Kalasha have faced recently as migrants move into their valleys.

“Some of these migrants are brainwashing the Kalash people. There have been several conversions to Islam this year alone,” Hussain said.

The winter ahead — when the valleys are cut off from the rest of the country by snow — will be long and hard this year, the Kalasha warn. In the village of Krakal, Shahida, a young Kalash woman explains: “We live on goat’s milk, cheese and beans during the winter months. Now with our crops washed away by the floods and no fodder for our livestock we are very worried.”

Towards recognition: NADRA to add column for Kalashas in CNIC form

The sturdy traditional construction of the Kalash homes helped them to survive the 7.5-magnitude earthquake that struck the Hindu Kush on 26 October, although some have cracks that must be repaired before winter. Most Kalash homes were also spared by the summer floods as they are built higher up on the mountainsides. But some tourist hotels and other buildings were washed away.

With all the reconstruction that will take place before the winter snow arrives in December, even more trees will be felled to rebuild hotels and houses. Shahida feels that deforestation is a part of the problem in the Kalash valleys.

“I think the main reason for the floods is the cutting of trees. There were so many forests up in the high pastures and they are gone now. If the government cannot control deforestation the floods will keep coming and become more severe,” she said. The Bumburet valley attracts thousands of tourists each year who come to see the Kalasha, especially during their festivals, when there is dancing and mulberry wine flows.

For many years, Greek volunteers would travel to the Kalash valleys to help with construction and other charitable work that contributed to their cultural preservation.

In 2009, one volunteer was kidnapped by the Taliban and released only after eight months in captivity. No further volunteers have come from Greece since then. “That was a big blow to our community since he was doing good work for the Kalasha. The second blow was when one of our shepherds was brutally murdered on the border with Nuristan a few years ago. Luckily the army has moved in and we have better security now,” said Shahida.

A military camp and new police station have sprung up in the last couple of years. The army is currently repairing roads and bridges destroyed by the floods, and they also patrol the high mountain border with Nuristan.

But “it’s not the Taliban that is the main threat,” said Quaid-e-Azam, a Kalash community leader from Rumbur Valley. “It is climate change. We need to start planning for future disasters, otherwise life is going to be very difficult for us.”

QUIZ: How well do you know Allama Iqbal?