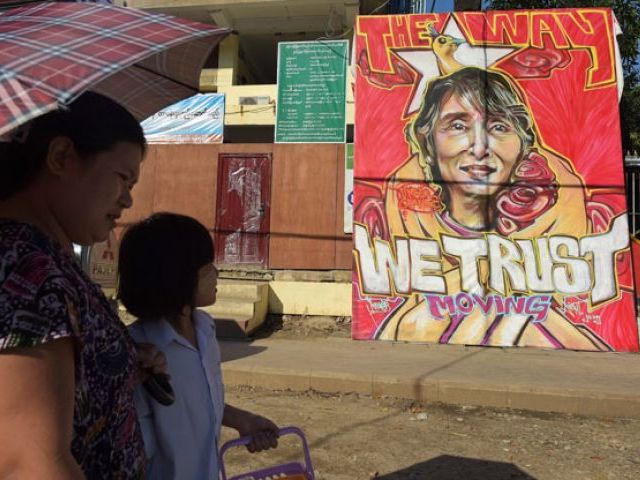 People walk past a graffiti depiction of Myanmar's opposition leader Aung San Suu Kyi outside the headquarters of the National League for Democracy party (NLD) in Yangon on November 13, 2015. PHOTO: AFP

YANGON: Blogger Nay Phone Latt spent years in prison under Myanmar’s former junta, but preparing to enter parliament as a newly minted MP for Aung San Suu Kyi’s democracy party, he refuses to let the darkness of the past dull optimism for the country’s future.

Generations of artists, activists and journalists carry the physical and emotional scars of languishing behind bars under decades of military rule.

But as Suu Kyi’s National League for Democracy (NLD) thunders to a landslide victory, many former political prisoners are eager to take part in what the Nobel laureate has described as the long-blighted nation’s “great leap” to democracy.

“We do not want the next generation to face what we faced. I never think about the past. I would like to focus on the current situation and the future,” Nay Phone Latt told AFP.

He would rather be a writer than an MP, but has turned his hand to politics as part of a wave of untested new lawmakers to help Suu Kyi and her party negotiate the dicey months and years ahead.

The 36-year-old was sentenced to two decades in prison in 2008 for his links to the “Saffron Revolution” monk-led protests against the junta, released in 2012 as part of an amnesty under the quasi-civilian government that replaced military rule.

Key to the challenges facing the NLD, he says, is its relationship with the still powerful army, which retains control over pivotal security ministries and a quarter of parliamentary seats.

Far from taking a combative approach to the generals that for years tried to crush their movement, Nay Phone Latt said civilian MPs would “build a relationship” with their military counterparts.

Richard Horsey, an independent expert on Myanmar, said there was no indication of the NLD “clamouring for retributive justice”. “The biggest desire that everyone has is just for the country to get back on their feet, to re-engage with the world,” he told AFP.

Myanmar’s paranoid former rulers earned the country its pariah reputation with a brutal approach to dissent, locking up thousands for perceived sleights and muzzling free speech with draconian legislation.

In a surprise move after mass protests in 1988 against their economically disastrous regime, the military called multi-party general elections. But it refused to accept the results when the NLD stormed to a landslide two years later.

Sunday’s polls are the first general election the party has contested since — and its 80 per cent sweep of the elected seats is a mirror image of the results it won a generation ago. “We have very mixed feelings, partly happy and partly very concerned,” said Ma Thida of the vote.

The doctor, author and human rights champion was handed a 20-year sentence by a martial court in 1993. “They accused me of distributing illegal pamphlets, this was my crime,” she told AFP.

Despite the nearly six years she served in prison for supporting Suu Kyi, Ma Thida does not shy away from criticising her party leader.

She fears a puppet president without an electoral mandate sends a bad signal to a new generation of voters, after Suu Ki said she will pull the strings of an NLD government given the current junta-scripted charter bars her from the role.

While it has won international praise for its reforms, Thein Sein’s government has locked up scores more activists in recent years, including dozens of student protesters held since a March crackdown on their rally calling for changes to an education bill.

But the changing political landscape has also seen improvements to the nation’s notorious prisons, according to artist Htein Lin.

He famously used prison uniforms as canvasses for smuggled-in paint during his incarceration at Yangon’s sprawling Insein Prison, artworks that have become an iconic symbol of Myanmar’s tortured past.

After years living in Britain with his wife, he has returned to the city as well as the jail — but this time to teach prison guards meditation.

The artist says the lessons are an attempt to reconcile the past and forgive. “We are suffering a lot in prison so why should we put these people in the same suffering? We just have to stop,” he said.

Preparing his latest paintings at a new studio in Yangon, he is stirred by the promise of the elections. “We are very proud. We are just beginning,” he said.