India seeks armed drones from US to counter Pakistan's Burraq

India seeks armed drones from US to counter Pakistan's Burraq 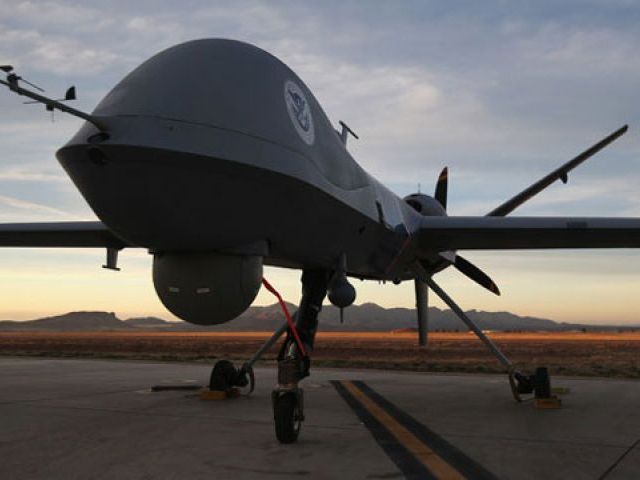 A US predator drone. PHOTO: AFP

India is seeking to become one of the first countries to import armed predator avenger drones from the United States in an apparent attempt to counter Pakistan’s indigenously developed armed drone Burraq.

Manufactured by General Atomics Aeronautical Systems Inc the unmanned aircraft are sleek, fast, killing machines which could strike targets across Pakistan and other neighbouring countries besides becoming a strategic consideration in border standoffs with China, according to Bloomberg.

If approved, the drones would be another sign of the growing defence ties between Washington and New Delhi. India was the second-largest buyer of US arms in 2014, up from virtually nothing five years ago.

“It’s actually quite amazing how quickly the Indian-US relations have developed. Within a few years India has embraced US weapons and America is now supplying India with very advanced military technology,” Siemon Wezeman, a researcher at the Stockholm International Peace Research Institute, said.

With Pakistan’s increasing reliance primarily on its indigenously built and up to some extent Chinese or Russian-made defence equipment the Avengers represent a small but significant tilt in the strategic dynamics of a region with three nuclear powers and about 40 per cent of the world’s population.

In a first, ‘Burraq’ strikes in Shawal Valley

In September, the US reportedly backed India’s membership in the Missile Technology Control Regime, a prerequisite for buying the drones, followed by a letter from the Indian Air Force to San Diego-based General Atomics, conveying its willingness to purchase the Avenger.

The Avengers can fly for 18 hours, carry 3,500 pounds of munitions and reach an altitude of 50,000 feet which will surpass Pakistan’s more limited in range and payload drone series.

“The drones, which can reach anywhere in Pakistan, obviously can heighten the tensions and increase the risk of a conflagration,” said defence analyst Lt-Gen (retd) Talat Masood.

India’s drone inventory currently comprises mostly surveillance-only models made by Israel but with the acquisition of armed drones India could be more likely to strike in Pakistan to retaliate after any terrorist attack which leaders in New Delhi immediately blame on Islamabad.

In July, the Pakistan Army claimed to have shot down an Indian ‘spy drone’ in Azad Jammu & Kashmir (AJK), in a sign of the decades-old tension between the nuclear-armed neighbours in the disputed region. “The spy drone was being used for aerial photography,” military’s media wing, ISPR, said.

India believes acquiring the armed drones will send a strong deterrent to any militants across the border. “Once people across know that they can be struck from the air without India thinking too much that there would be a pilot who may get shot down, that sends a deterrent,” Manmohan Bahadur, a retired India Air Force officer and a member of the Centre for Air Power Studies in New Delhi, said.

However, Bahadur stressed that such drones would not “be used as a free for all”. “This border is a contested air space that you’re talking about.”

The sale of Predator Avenger to India may not be carried out any time soon as it requires New Delhi to become a member of the Missile Technology group of 34 nations that have common rules for exporting weapons systems and the bloc’s annual meeting concluded on October 9 without India being named a member.

Meanwhile, US officials “remain steadfast” in supporting India’s membership, Helaena White, a US State Department spokesperson, said on November 5. As to India buying the Avenger, White said, “I can’t speculate on a hypothetical request.”