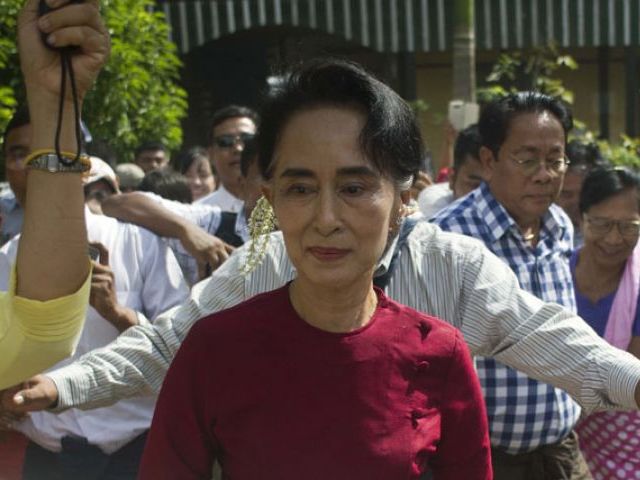 YANGON: Myanmar voters cast their ballots on Sunday in a historic election that could thrust Aung San Suu Kyi’s pro-democracy party into power and finally pull the country away from the grip of the military.

In a reminder of Suu Kyi’s star power, the opposition leader, wearing a traditional skirt with her trademark string of flowers in her hair, was mobbed by scores of reporters as she voted in Yangon.

Supporters crushed into the school yard acting as a polling station, shouting “Victory! Victory!” as the diminutive democracy heroine edged through the crowd.

Her National League for Democracy (NLD) party believes a fair vote will power it into government after a decades-long struggle against army dictatorship.

But the Nobel Laureate is barred from the presidency by the army-scripted constitution and the NLD faces an uphill struggle as a quarter of seats are still reserved for the military.

In the capital Naypyidaw, President Thein Sein, a one-time top-ranking junta general, smiled for the cameras and held up his little finger, stained with purple ink, after voting.

His ruling Union Solidarity and Development Party (USDP), an army-backed behemoth stacked with former military cadres, is the main obstacle to an NLD victory.

Many voters remain nervous about how the powerful army will react if it loses with concerns over fraud which riddled previous elections.

But after casting his vote in the capital, Myanmar’s powerful army chief said his troops would respect the voice of the electorate. “Just as the winner accepts the result, so should the loser,” he told reporters.

Across the country queues of people, many wearing traditional longyi sarongs, snaked outside polling stations.

At Suu Kyi’s rural constituency of Kawhmu, where the opposition leader travelled after casting her ballot, crowds smiled and waved, jostling for space in between the media scrum.

“I was very excited and so worried that I might do something wrong that my hands were shaking,” said fish-seller Kay Khine Soe of the moment she cast her vote. “I thought if I made a mistake my vote could be lost,” the 37-year-old added.

Aspirations for change run high in Myanmar after five decades of brutal junta smothered opponents with violence and jail. But in 2011 the regime suddenly handed power to a semi-civilian government led by former generals.

Sweeping reforms since have loosened the straitjacketed economy and brought many freedoms to an isolated, wearied people. Some 30 million people are eligible to vote, in an event that has posed major logistical challenges across a vast and poor country.

Election officials earlier insisted voting was going well but the NLD later made allegations of vote-buying by the USDP in one village in the Irrawaddy Delta.

Polls will close at 4pm (0930 GMT) with the attention then turning to the NLD headquarters in Yangon where the unofficial seat count will begin. Formal results are not expected until Monday morning at the earliest.

It is the first election the NLD has contested since 1990, when the party claimed a landslide only to see the army ignore the result and condemn Suu Kyi to spend most of the next 20 years under house arrest.

The 70-year-old is not allowed to be president under a charter that blocks anyone with foreign children from top office — Suu Kyi’s two sons are British.

But on Thursday she declared an NLD win would see her take a position “above the president” — a challenge to the army which has spent 25 years trying to hamper her political ascent.

Suu Kyi has also faced international censure for failing to speak up for the country’s embattled Muslim population — especially the ethnic Rohingya in restive Rakhine state.

Hundreds of thousands of Rohingya have been excluded from voting, and the poll will not be held in several border areas where fighting between the army and ethnic rebels simmers.

Suu Kyi’s supporters, many of whom were voting for the first time on Sunday, see an NLD win as a major stride towards the fulfilment of her destiny to lead the country. “I couldn’t sleep the whole night I was so excited,” Ohnmar Win, 38, told AFP. “It’s my first time voting. I hope for the best.”

To win a majority — and have free rein to choose its presidential candidate — the NLD needs to secure just over two thirds of the contested seats, although it could still make alliances with smaller parties if it falls short.

The USDP needs only around a third of seats to join up with the military bloc, which is allotted 25 per cent of all parliamentary seats, to select its presidential nominee.