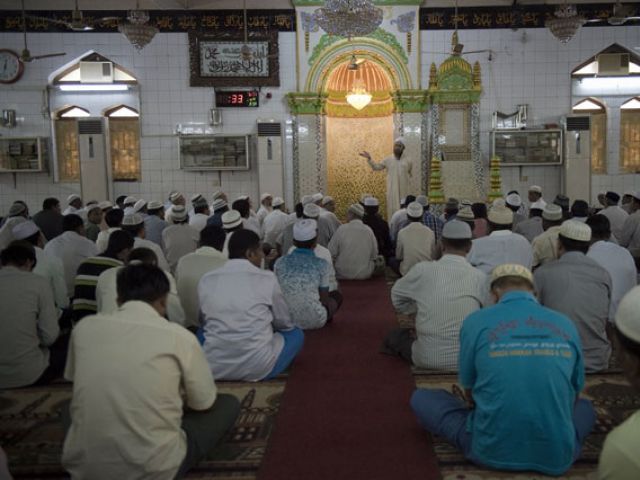 Myanmar Muslim worshipers listen to a speaker at a mosque in Yangon on November 6, 2015. PHOTO: AFP

YANGON: As the faithful filed towards a Yangon mosque for Friday prayers, conversations readily turned to Myanmar’s election, with hopes for greater freedom tainted by fear among Muslims at the sharp end of bilious hard-line Buddhist rhetoric.

Sunday’s election, billed as the freest the former junta ruled nation has seen in decades, has been accompanied by a crescendo in anti-Muslim sentiment led by a hard-core of Buddhist monks.

A lone Muslim campaigns in Myanmar’s stronghold of radical Buddhism A Myanmar Muslim street food vendor sleeps next to his chariot at a slum in Yangon on November 6, 2015. PHOTO: AFP

That has heightened anxiety among the residents of Mingalar Taung Nyunt, a wedge of shacks and scruffy low-rise wooden houses that are home to a large Muslim community of roti sellers and merchants in central Yangon. Myanmar Muslim children attend school classes in a shack at a slum in Yangon on November 6, 2015. PHOTO: AFP

“We’re afraid of what happens after the election,” Myo, 33, told AFP, requesting the use of an alias. “There are people who are ready to threaten or attack us,” she said, blaming “the monk” for whipping up animosity as the poll looms. A Myanmar Muslim girl looks on in a slum in Yangon on November 6, 2015. PHOTO: AFP

She was referring to Buddhist monk Wirathu, whose notorious anti-Muslim tirades have garnered a significant following, including 100,000 Facebook followers.

He has ramped up pressure on the army-backed government over the last few years and has applauded the exclusion of hundreds of thousands of ethnic Rohingya Muslims from voter lists in febrile western Rakhine State. A Myanmar Muslim woman sit outside her shak as a boy hug her in a slum in Yangon on November 6, 2015. PHOTO: AFP

He also claims victory for a series of controversial race and religion laws endorsed by the ruling party, which rights groups say target Muslims.

While she is scared, Myo, who shares her ramshackle home with 13 family members, said Muslims were gritting themselves for any post-election fallout. “If anyone comes to fight… our community will come together,” she said. Her fears carry weight in a country scored by religious violence since 2012 which has seen hundreds of people killed — the majority Muslims.

Myanmar’s Muslims make up around five per cent of the 51-million population. “We’re only a few people here, we have no-one to protect us… we’re living under pressure” 75-year-old Mohammad Hashim told AFP, his white fist-length beard lit up by the harsh sun. He blames the ruling, military-backed “government of problems” for the recent build-up of community tensions and fears a win for Suu Kyi’s National League for Democracy (NLD) will presage unrest. “The authorities will not let the NLD win, even if they claim 100 per cent of the seats… I have seen them act before,” he says with a rueful smile. Myanmar Muslim worshipers clean chickens to be cooked outside a mosque in Yangon on November 6, 2015. PHOTO: AFP

An NLD landslide in 1990 was ignored by the army who simply locked up more political opponents and trampled on dissent. With national elections looming, the temperature is again rising. Myanmar Muslim worshipers perform ablutions ahead of a prayer at a mosque in Yangon on November 6, 2015. PHOTO: AFP

Wirathu and the Ma Ba Tha Buddhist nationalist movement have thrown their support behind the incumbent Union and Solidarity Development Party (USDP) as a reward for drafting the contentious religious bills.

All work and no play: Myanmar’s children prop up economy

At the core of their ideology is the belief that Myanmar’s Buddhist identity is under attack from Muslims — tirades against the conversion of Buddhist women to Islam feature prominently in their output. Fans designed with the image of Myanmar opposition leader Aung San Suu Kyi are seen at a souvenir shop of the National League for Democracy party (NLD) in Yangon on November 6, 2015. PHOTO: AFP

UN Secretary General Ban Ki-moon hit out Monday at “extreme elements among the majority community in Myanmar” using hate speech to incite “communal animosities” in the run-up to the poll.

Suu Kyi has also come under fire from rights groups for failing to use her moral force to denounce Wirathu or to speak up in defence of Muslims. Her NLD party has not put forward a single Muslim candidate. An overseas worker from Singapore arrive back for vote at Yangon International airport on November 6, 2015. PHOTO: AFP

Observers describe it as a strategic silence to avoid a messy backlash from her core Buddhist vote-base. But the residents of Mingalar Taung Nyunt refuse to blame Myanmar’s pro-democracy heavyweight, with many still pledging allegiance to the NLD.

“If Daw Suu Kyi had full authority she would fix our problems,” said Ye Min Oo, a 29-year-old roti seller. “The Ma Ba Tha are extremists, playing a political game. Right now, Suu Kyi does not have the power to do anything about them.”