Geeta flies back to her family today

Geeta flies back to her family today 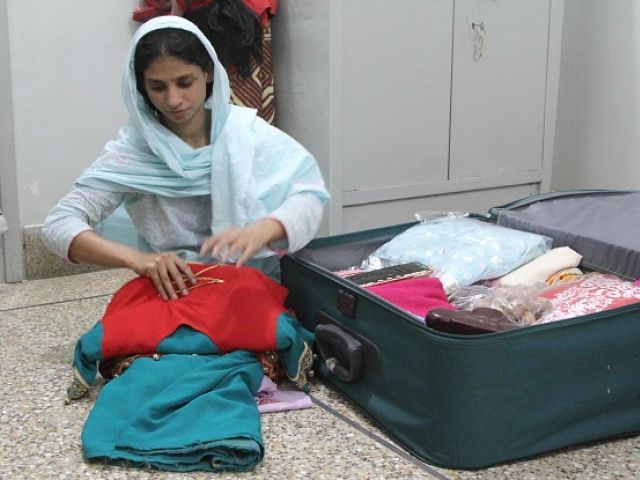 Five members of the Edhi family, including Saba and Bilquis Edhi, are accompanying Geeta to India. PHOTO: EXPRESS

KARACHI: Geeta, the hearing and speech-impaired girl from India who has been stranded in Pakistan for the past 13 years, packed her belongings in a teal-coloured suitcase and a blue steel trunk on Sunday. She was all set to fly back home.

The story of the 23-year-old bears a striking resemblance to that of the Salman Khan-starrer Bajrangi Bhaijaan, which was released in July. The film’s success provided an impetus to efforts for tracing Geeta’s family.

After her story went viral on social media, journalists and rights crusaders from both sides of the border started campaigning to reunite her with her family. Last month, an official of the Indian High Commission in Pakistan, PK Jain, said she had been recognised as an Indian citizen.

As Geeta dusted her black purse with her sky-blue  dupatta, she wore a bright smile that made her eyes twinkle with anticipation. She could hardly wait for the PIA flight PK-272 to take her to her motherland Monday morning. She could not contain her excitement, and hoped to return to her parents and siblings as soon as possible.

“She is taking with her the clothes and gifts she wants to give her family,” said Saba Edhi, who helped Geeta pack her luggage. Five members of the Edhi family, including Saba and Bilquis Edhi, are accompanying Geeta to India. “We are going to New Delhi, where we shall hand her over to the Indian government and return on November 2.”

Geeta chose a blue and silver sari for her mother and clothes for every one of her seven brothers and four sisters. She posed for photographs with the gifts she received before her departure from Pakistan, which has showered her with love and care for over 13 years.

She is taking with her all the gifts she received in the past few years – including a gold-jewellery set from Bilquis Edhi, a silver-jewellery set from Faisal Edhi on Raksha Bandhan and a gold chain with a pendant that bears her name.

“We have also packed some dresses for her to wear on Diwali next month,” said Saba, as Geeta folded all her clothes and placed them in her suitcase along with bangles, watches and dry fruits.

Geeta used the sign language to say she felt blessed to be in Pakistan, as translated by her instructor Ishrat Shaheen. “She will never forget how much love and respect Pakistan has given her.” Geeta said she would keep in touch with her instructor and friends via internet video chat.

Praying for the last time in the small room where she lived for the past several years, Geeta hoped India would also welcome her with open arms and take care of her the same way the Edhi family did in Pakistan.

Razia Saher, Geeta’s only best friend for the last five years at the Edhi Home, was happy for her friend but she was also sad to lose her. “She is the only friend I have here,” said Razia.