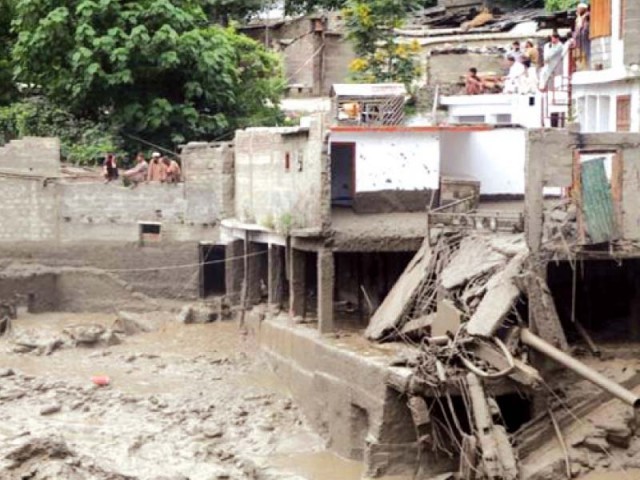 Speakers highlighted the deadly effects of floods, like the recent one in Chitral. PHOTO: FILE

Speakers from various South Asian and European countries were addressing a two-day international moot on “Glacier Lake Outburst Floods: Challenges and Adaptation Solutions”, which started here at a local hotel on Wednesday.

The conference is being jointly organised by the Ministry of Climate Change, United Nations Development Programme (UNDP), Pakistan GLOF Project and Adaptation Fund.

Countries in the region including Pakistan have witnessed increased frequency in GLOF incidents, which occur when the dam containing a glacial lake, bursts and unleashes water at a frightening speed.

The speakers observed that such flooding could wipe out everything in its way, such as the one witnessed recently in Chitral District.

Climate Change Secretary Arif Ahmed Khan said it was a multi-dimensional challenge and strong partnership and multi-lateral cooperation was required to dealing with the issue.

The secretary added that multi-lateral cooperation, partnerships and coordination at national and regional scales were the need of the hour.

He informed participants from various countries that for making Pakistan resilient to GLOF incidents, the ministry in collaboration with the UNDP-Pakistan initiated a four-year Climate Change Adaptation Project in 2011 “Reducing Risks and Vulnerabilities from Glacier Lake Outburst Floods in Northern Pakistan” at a cost of $7.6 million, for which the Pakistani government contributed $3.5 million.

Launched in Gilgit and Chitral, the project aimed at developing human and technical capacity of public institutes to understand and address immediate GLOF risks for vulnerable communities in Northern Pakistan, the secretary said.

UNDP Deputy Country Director Tracy Vienings said “No one can stop the outburst of glacial lakes in Pakistan’s north. But efforts can be made in the light of the GLOF Pakistan Project to save lives and livelihoods of tens of thousands of poor mountain communities, which are now at the mercy of nature”.

He observed that glaciers in Pakistan were retreating at a rate of 40 to 60 meters in a decade, which was much faster as compared to the other countries in the region.

Maneka revealed that 36 identified glacial lakes in the country had been declared potentially hazardous and were on the verge of outburst anytime, adding that the severity of GLOF risk in Paksitan merited response on a war-footing.

Out of the darkness: Govt should allocate 4% of GDP to technology: expert