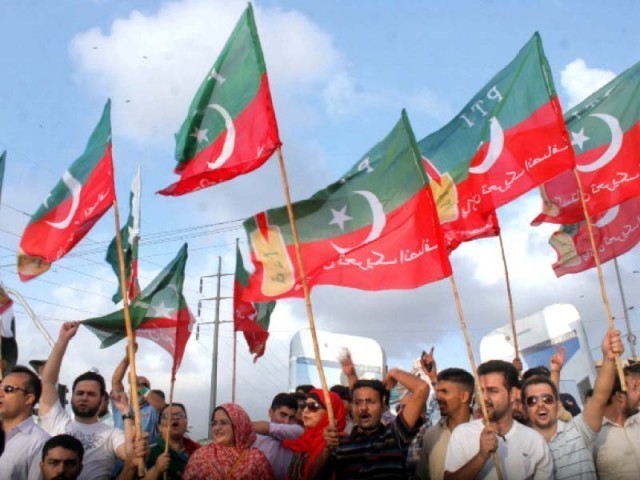 A file photo of a PTI rally. PHOTO: ATHAR KHAN/EXPRESS

ISLAMABAD: As the much awaited contest in the NA-122 Lahore constituency inches closer, the Pakistan Tehreek-e-Insaf (PTI) has written to the Election Commission of Commission (ECP) that the ruling Pakistan Muslim League-Nawaz (PML-N) was violating electoral laws.

“This is being written to you to lodge a strong protest against the continuous violations of electoral laws by the leadership of PML-N, including the PM and CM Punjab in respect of the campaign being conducted in NA-122,” reads the letter written by PTI Information Secretary Naeemul Haq addressed to Chief Election Commissioner (CEC) Justice (retd) Sardar Raza Khan.

Haq also expressed disapproval of ECP Punjab member Justice (retd) Riaz Kiyani, saying “you are already aware of our position in respect of ECP member Justice Riaz Kayani. While we have absolutely no confidence in his perceived impartiality, we expect you to intervene, prevent and punish all those violations designed to influence the voter’s mind after the campaign has stopped.”

The PTI demanded the CEC to personally oversee the October 11 by-election in NA-122. “We expect your personal oversight in the crucial by-elections being held tomorrow in NA-122.”

Read: Will not allow rigging in NA-122 by-poll: Imran

Earlier on Friday, PTI chairman Imran Khan challenged the prime minister to face off while calling him the most corrupt person in the country.

In response, PML-N leader Hamza Shahbaz censured PTI’s politics of sit-in and that the party was wasting the nation’s time.

Polling for NA-122, Lahore, is due on October 11 and the PTI has fielded former provincial minister Abdul Aleem Khan against PML-N’s Ayaz Sadiq.