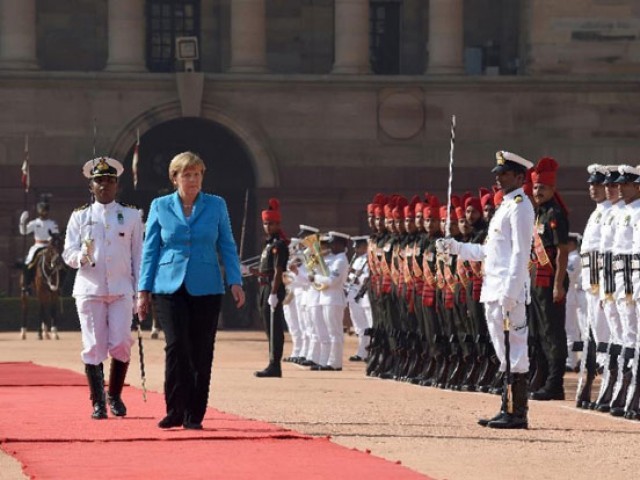 German Chancellor Angela Merkel inspects the guard of honour during a ceremonial reception at the Presidential Palace in New Delhi, on October 5, 2015. PHOTO: AFP

NEW DELHI: Angela Merkel began a mission on Monday to clear the path for German companies keen to do business in India, as Prime Minister Narendra Modi looks to the European powerhouse to help revive its economy.

Briefly leaving behind a refugee crisis in Europe, the German chancellor landed in New Delhi late on Sunday for a three-day visit focused on boosting defence, renewable energy, and other bilateral trade.

Merkel, flanked by a large business delegation, will meet Modi and trade officials on her first trip to India since the right-wing premier stormed to power last May promising to reform and revive Asia’s third largest economy.

“We are cooperating in areas such as economy, agriculture, internal security matters, development issues, defence matters and also in financial relations,” Merkel said after a ceremonial welcome at Delhi’s presidential palace.

The chancellor said their talks would also focus on climate change, ahead of a critical UN-led meet in Paris on cutting greenhouse gas emissions.

Germany is already India’s most important trading partner in Europe and both Modi and Merkel have said they are keen to boost two-way trade.

“A reliable legal and administrative framework is indispensable for German companies in India,” he said in an interview with the Hindustan Times, while applauding Modi’s government for moving in the right direction.

Foreign companies have long despaired at India’s levels of taxation, corruption and other hurdles to doing business. But many have welcomed Modi’s efforts on economic reforms aimed at making India a more reliable and transparent place to invest.

“That obviously has growth potential,” a German official with knowledge of the trip said.

The leaders met in April on Modi’s first official visit to Germany, where the Indian premier sought more investment as he ramps up his drive to make India a manufacturing hub.

Germany agreed to lend India some of the vocational education expertise that has turned it into an engineering giant, with skilled workers crucial for Modi’s “Make in India” campaign.

Merkel’s delegation this week includes Steinmeier, several other cabinet ministers and German business leaders, who will also travel to the southern technology hub of Bangalore.

India overtook China to top the league table for greenfield foreign direct investment (new ventures) in the first half, pulling in $30 billion in estimated capital expenditure, according to a Financial Times analysis.

German investments in India stand at 9.7 billion euros with about 1,600 companies in the country, where the chemistry, energy and pharmaceuticals sectors are of greatest interest.

While any trade deals are still hush-hush, one agreement has been made concrete — Germany’s decision to hand back a 9th-century statue of the Hindu goddess Durga last month.

Merkel is expected to visit the statue, which the Stuttgart Linden museum had bought at auction but decided to voluntarily return after it was found to have been looted from Kashmir in the 1990s.