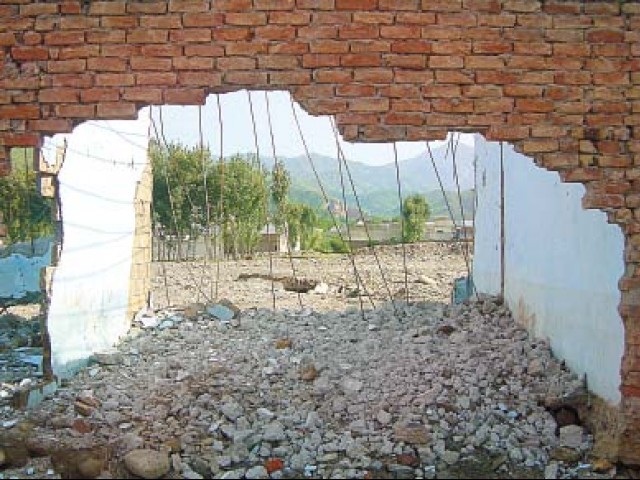 A bombed out school in Swat. PHOTO: FAZAL KHALIQ

SWAT: With the present collapsed infrastructure of the education sector in which more than 400 educational institutions were damaged by militants, tangible steps for rehabilitation remain unseen. This is in spite of the fact that Khyber-Pakhtunkhwa (K-P) government already declared Swat valley a war affected zone.

To project the problems in the educational sector, which received immeasurable losses after four years of turmoil and militancy, followed by the massive floods, a society called Education Promotion Cooperative Society (EPCS), Swat has been formed by some of the renowned and experienced educationists and scholars of Swat.

EPCS Secretary Siddiq Akbar, told The Express Tribune, “Our district remained under insurgency for nearly four years and then was terribly hit by the floods, in which the education sector was directly affected and the whole system collapsed, so when we felt that no satisfactory measures were taken for the rehabilitation of the education sector, we took the initiative ourselves and formed EPCS to work for streamlining the education system on a self-reliant basis.”

“We will also help students in higher classes who are mentally, morally and economically depressed and are unprepared to face the challenges of tomorrow.” He added.

EPCS Finance Secretary Fazal Mahmood Rokhan, who is also a well known writer of Swat, commented on the role of the EPCS, “We expected the government to reconstruct destroyed schools on an emergency basis but were really disappointed with their mere verbal claims and announcements, so we decided to step up and do it ourselves.” He said that EPCS will try to restore and streamline the education system because we see that after the displacement, our children suffer from many psychological issues.”

Criticizing the government role he said, “For three years our children did not get education and they were promoted three grades without learning a single word. No one can judge the mental level of our students, there must be some sorts of training to level their mental growth.”

EPCS President Saeedudin lined out the goals of the organisation, saying that proper arrangements for the education of poor people, ensuring rehabilitation and reconstruction of the destroyed schools during the insurgency and improving the state of girls education were important goals. EPCS also wants to ensure high standard education in the schools, ensure the presence of students in class and make arrangements for technical education.