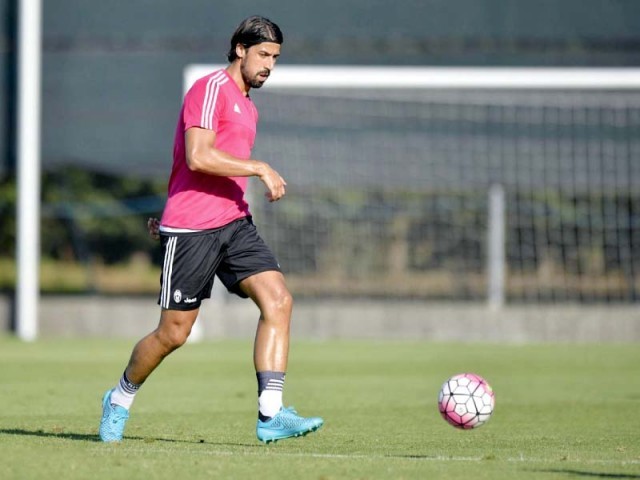 Khedira was one of the several players brought in by Juventus over the summer as they look to cope with the departures of Andrea Pirlo and Arturo Vidal in midfield. PHOTO COURTESY: JUVENTUS.COM

MILAN: Juventus host Sevilla hoping to continue their positive start to this season’s Champions League in a Group D encounter that will see both sides endeavour to leave their poor domestic form behind them.

The Italian’s stock among Europe’s football elite rose considerably after reaching the final last season, where they were outclassed 3-1 by Barcelona. But hopes of a repeat this year are already looking slim if Juve’s disappointing start to the fledgling Serie A season is anything to go by, although Sevilla are in similar straits.

Juventus have dropped to 15th place with just five points from six games — their worst start to a season since 1969-70 — while Sevilla sit just two points off the relegation zone in La Liga after six games, although in Europe’s premier club competition both have made impressive starts.

Juve claimed a shock 2-1 win at Manchester City thanks to goals from Mario Mandzukic and Alvaro Morata, while Sevilla kicked off their campaign with a 3-0 win over Borussia Moenchengladbach.

Confidence is low in Turin though and when skipper Gianluigi Buffon gave a rare television interview on Sunday, it was seen as a collective mea culpa. “We have to put aside all talk of the scudetto for the next few months,” said Buffon. “The distance [between Juventus and the top of the league] is so great that we can’t allow ourselves to get carried away by flights of fancy.”

The World Cup winning keeper also talked of the difficulties ahead. “We have to roll up our sleeves, get our hands dirty and deal with the situation. We know what we need to change to improve, and we’ll be taking it now match by match,” he said. “The Champions League is a beautiful showcase, and it’s now a chance for us to regain a certain degree of certainty and enthusiasm. We need a ferocious, determined approach to Sevilla. It’s a game we want to win.”

Sevilla are the Europa League champions and have been known to pull above their weight, especially in Europe. “We want to love the Champions League like we did the Europa League,” said manager Unai Emery. “We are going there with the idea of enjoying the experience and improving. Juventus were the Champions League finalists, they are a great team, although at the moment they are a bit below that level.”

Manchester United looking to lock up the Wolves

Back on top of the Premier League, Manchester United will attempt to get their Champions League campaign off the ground when they welcome Wolfsburg to Old Trafford.

Domestically, United made a slow start to the season, but the deadline-day arrival of Anthony Martial appears to have inspired Louis van Gaal’s side, who have recorded four consecutive three-goal victories.

Saturday’s 3-0 win over Sunderland took United to the top of the league for the first time since 2013, but having begun the Champions League with a 2-1 defeat at PSV Eindhoven, they are under increased pressure to win their first home game.

“I think with how the other game went, losing 2-1 to PSV, we know that our home games in the Champions League are crucial to getting through the group,” said centre-back Chris Smalling. “Hopefully we can keep the fans happy and take maximum points.”

The last time United failed to win either of their first two group games was in 2011-12, when a 1-1 draw at Benfica was followed by an untidy 3-3 draw at home to Basel. Two and a half months later, they were out.

Wolfsburg are slowly adapting to life without Kevin De Bruyne, Germany’s Footballer of the Year last season, and new signing Julian Draxler is still bedding in.

But they hold the upper hand over United ahead of Wednesday’s encounter, having opened their Group B campaign with a 1-0 home win over CSKA Moscow. “United are a top side,” said German international Andre Schuerrle. “We are a bit in the underdog role and we’ll have to give our all. Then we have a chance.”