Protes­ters are angry about plans in the new consti­tution to divide Nepal into seven federa­l provin­ces
By AFP
Published: September 28, 2015
Tweet Email 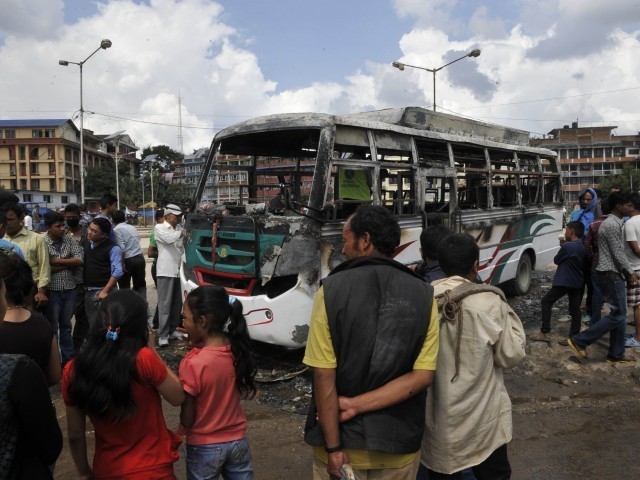 Nepalese bystanders gather around the charred remains of a bus, which was set alight during a general strike call by the hardline breakaway faction of former Maoist rebels (Communist Party of Nepal-Maoist), in Kathmandu on September 20, 2015. PHOTO: AFP

BIRGUNJ, NEPAL: Nepal began rationing fuel on Monday as hundreds of protesters blockaded a key import hub on the Indian border to demand changes to a new constitution they say is unfair.

The move follows a weekend decision to limit the number of vehicles on Nepal’s roads as the landlocked Himalayan country faces a looming fuel shortage.

Nepal imports all its fuel from India and the protesters, from the Madhesi ethnic minority, are blocking a bridge crossing in the town of Birgunj, 90 kilometres (55 miles) south of Kathmandu, that serves as the key hub.

The Madhesis are angry about plans in the new constitution to divide Nepal into seven federal provinces, which they say will leave them under-represented in the national parliament.

“Taxi drivers will be allowed to purchase 10 litres every alternate day while small public buses will get 15 litres,” Bhattarai told AFP.

Since Sunday, drivers have been allowed on the roads only on alternate days, depending on whether their licence plates end in odd or even numbers.

Officials say cargo movement through other border checkpoints has also declined sharply since last week, and fears of a fuel shortage have prompted commuters to form long lines at petrol stations in Kathmandu.

“We have supplies to manage for a couple of weeks if things carry on like this,” a senior NOC official told AFP on condition of anonymity.

The new constitution is the final stage in a peace process that began when Maoist rebels laid down their arms in 2006 after a decade-long insurgency.

But the adoption of Nepal’s first charter to be drawn up by elected representatives has been marred by weeks of violent protests in the southern plains, home to half the country’s population.

More than 40 people have died in weeks of clashes between police and protesters and the violence has sparked concern in India, which has traditionally exerted significant political influence in Nepal.

Scores of trucks are stranded on both sides of the border, where exhausted drivers complained about the blockade.

“I drove here from Delhi… and I have been stuck for 22 days,” Mohammed Shahid told AFP.

“Because I am carrying medicines, I have to keep the air conditioning on but I am running out of diesel.”

Work on the new constitution began in 2008 after the Maoists won parliamentary elections and abolished the monarchy. But power-sharing squabbles between parties stymied progress.

Lawmakers finally reached agreement in June this year, spurred by a 7.8-magnitude earthquake two months earlier that killed nearly 8,900 people and destroyed more than half a million homes.