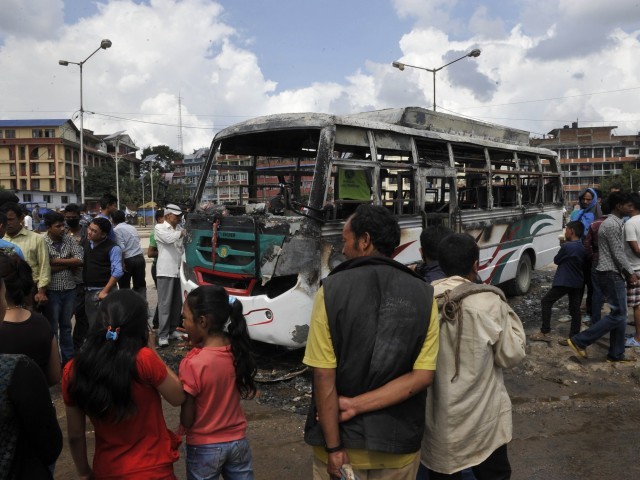 Nepalese bystanders gather around the charred remains of a bus, which was set alight during a general strike call by the hardline breakaway faction of former Maoist rebels (Communist Party of Nepal-Maoist), in Kathmandu on September 20,2015. PHOTO: AFP

KATHMANDU: Nepal on Sunday adopted a new constitution aimed at bolstering its transformation from a Hindu monarchy to a secular democracy, as violent protests raged against some of the terms of the charter.

Firecrackers went off in celebration in Kathmandu as President Ram Baran Yadav announced the adoption of the constitution, the first to be drafted by elected representatives.

Lawmakers approved the charter on Wednesday despite weeks of violent protests against plans to divide the Himalayan nation of 28 million people into seven provinces.

More than 40 people have been killed in clashes between protesters and police, among them two children and a police officer lynched as he was driven to hospital in an ambulance.

One protester was killed on Sunday when police fired into a crowd of people who had defied a curfew in the southern district of Parsa to demonstrate against the charter.

The move to create a new federal structure that will devolve power from the centre has widespread support, but critics say the planned internal borders will leave some historically marginalised groups under-represented in parliament. Nepalese police arrest a demonstrator during a general strike called by a hardline breakaway faction of former Maoist rebels (Communist Party of Nepal-Maoist) against the draft of the new constitution, in Kathmandu on September 20, 2015. PHOTO: AFP

They include the Madhesi and Tharu ethnic minorities, mainly from Nepal’s southern plains along the border with India.

India has expressed concern at the violence, which has seen some parts of southern Nepal shut down for weeks.

The new constitution is the final stage in a peace process that began when the Maoists laid down their arms in 2006 after a decade-long civil war with the state and turned to politics, winning parliamentary elections two years later and abolishing the monarchy.