The Indian direct­or is all praise for Humayu­n Saeed and his film
By Entertainment Desk
Published: September 23, 2015
Tweet Email 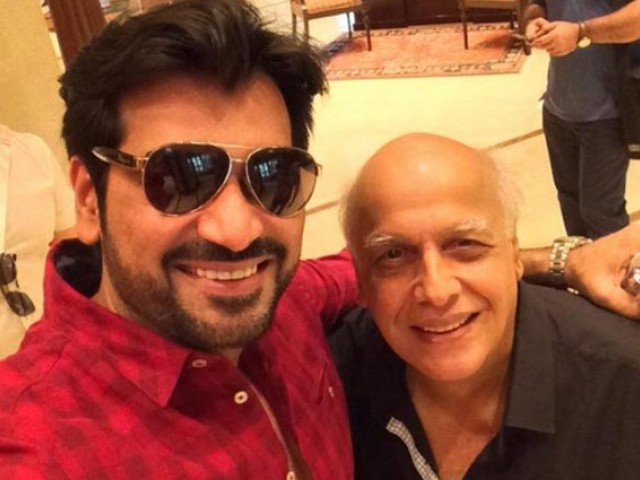 The Indian director is all praise for Humayun Saeed and his film. PHOTO: TWITTER/MAHESHBHATT

We all know Mahesh Bhatt flew to Lahore on Humayun Saeed’s request to watch the screening of Jawani Phir Nahi Ani (JPNA). Well, Bhatt sahab loved the film so much that he can barely stop tweeting about it!

His Twitter timeline is full of praise for Humayun and JPNA. He tweeted the poster of the film and applauded Humayun, who not only has a lead role in the film but is also the producer:

The rise and the rise of Humayun Saeed ! pic.twitter.com/vk1xrFUg7d

Apparently, the two hit it off and took selfies together:

Humayun Saeed my actor / producer friend from Pakistan is all set to celeberate the success of his latest film! pic.twitter.com/t4yl9us0cE

He gave the film an ‘outstanding’ review and was even spotted taking a selfie with the cast and crew of JPNA in Lahore:

Even the media went ballistic at the site of Bhatt sahab at the JPNA Lahore premiere:

But he wasn’t the only one who fell in love with the film, tweets showing love and support for JPNA soon surfaced post-premiere:

#JPNA is one of the best comedies produced by Pakistan in recent years. Loved the acting, the direction & the script! pic.twitter.com/KuQFIOl3sZ

Even Fahad Mustafa didn’t lose the opportunity to click a selfie with the cast and upload it on Twitter:

Mahira and Mawra, who weren’t able to attend the premiere, sent best wishes to the JPNA team:

And Humayun was grateful for all the love:

The support and feedback for #JPNA so far has been fantastic and overwhelming – thank you all.

First premiere of #JPNA done.Thank you every one 4 the feedback.Dont ve enough words to express my gratitude so..God is Great :)