Abdul Malik is curren­tly a master’s studen­t, with dreams of pursui­ng a doctor­ate
By Asad Zia
Published: September 21, 2015
Tweet Email 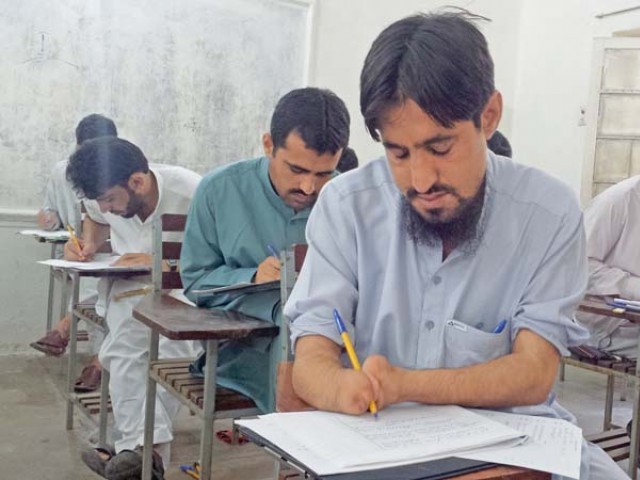 A picture of Abdul Malik while he takes notes in class. PHOTO: EXPRESS

In March 2001, eight-year-old Abdul Malik, from Bajaur Agency, was on his way to his aunt’s house when he found a toy bomb lying on the ground. Like most children, he was curious and picked up the device.

Minutes after the eight-year-old picked up the toy bomb, it went off in his hands. Abdul was rushed to the hospital. One of his eyes was badly damaged and he lost both his hands as a result of the explosion.

“One of my hands was destroyed in the attack,” he tells The Express Tribune. “The doctor advised me to have my other hand amputated as it could have lead to cancer.”

Without looking back at what could have been, over the last 15 years, Abdul has only forged ahead. He is currently a final-year master’s student of Urdu at University of Peshawar (UoP). Now 22, Abdul has proved disability is not synonymous with inability.

Read: The disabled man who realised his crushed dream

He studies hard and takes his exams, aiming to excel. However, each time he has to sit for a test, the 22-year-old holds a ballpoint with his limbs, not his phalanges.

Abdul has vivid memories of challenges he has faced since his childhood tragedy.

“Soon after I [lost my hands], my father had a heart attack and passed away,” he says. “I was the oldest and had to look after my three sisters and two brothers.”

At a time when he needed considerable support and assistance, Abdul had no choice but to shoulder the responsibility of looking after  his siblings.

Eye of the storm

In 2008, a military offensive was launched in Bajaur and residents were asked to vacate the region. At age 15, Abdul had to take the decision to relocate his family to Jalozai Camp to keep them safe.

“However, my mother refused to leave Bajaur,” he explains. “She was suffering from heart disease and could not travel. As a result, I told the rest of my family to proceed to camp without us and stayed with my mother in the agency.”

During these difficult and dangerous times, Abdul lived in mortal fear. “Our days were spent in fear of airstrikes while our nights were spent in darkness as we were not allowed to switch the lights on,” he adds.

Following the operation, his family members returned to Bajaur and eventually managed to get back on their feet.

Read: Pindi to have park for children with disabilities

As his family’s situation improved, Abdul decided to go back to school.

With the help of a relative, he gained admission at a school in Salarzai tehsil.

After his intermediate education, Abdul started a small business along with his friend to earn a living. With the help of Community Motivation and Development Organization (CMDO), a local NGO, he was simultaneously able to complete
his education.

“I want to pursue a PhD,” he says. “Neither of my siblings opted for higher education. Although I have seen difficult times, I never allowed myself to be discouraged.”

According to Abdul, he initially found it extremely challenging to write without hands, without what most consider a given – fingers and opposable thumbs.

“Fortunately, I was able to overcome this issue,” he explains, though not without pride. “I feel deeply offended when people call me handicapped or disabled. I cannot bear to hear such words.”

According to Abdul, there are around 3,000 people who have been left with missing limbs or other physical disabilities due to
militant attacks.

“No government or private organisation has taken an initiative to financially support them,” he adds.