The silver lining: The disabled man who realised his crushed dream

The silver lining: The disabled man who realised his crushed dream 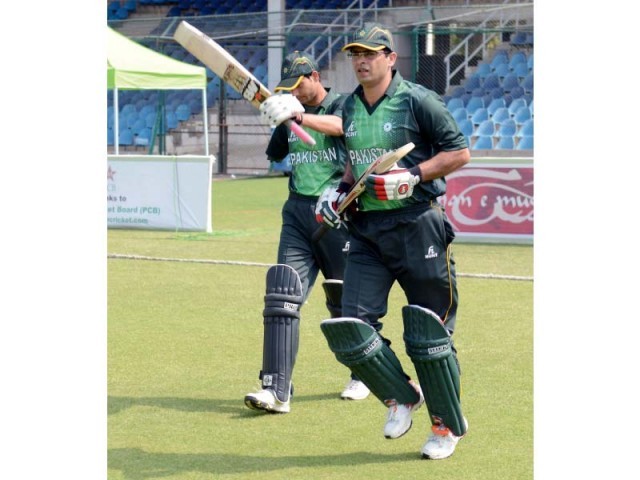 Alam was the first man to score a century in disabled cricket, when he did so against England. PHOTO COURTESY: PAKISTAN DISABLED CRICKET ASSOCIATION

KARACHI: Some dreams are never meant to be. Major Hasnain Alam’s dream of playing cricket for Pakistan would have been one such crushed dream had the cricketer-turned-soldier-turned-cricketer not been made of sterner stuff.

A son of a soldier, Hasnain Alam realised being a cricketer was his calling from a very early age. In his father he found a coach and a figure of support during his formative years before he joined a cricket academy.

From the age of six, Alam dreamt of donning Pakistani colours and it took 11 years of hard work for him to finally make it. The then 17-year-old was selected in Pakistan’s U19 team in 1994 courtesy of his hard-hitting batting. He toured New Zealand with the side but did not get a chance to bat.

Undeterred, he continued performing in the domestic circuit, including a century in a final against Karachi — overshadowing T20 skipper Shahid Afridi himself, who was part of the opposition.

But a national call up continued to evade him and, as a 19-year-old, Alam followed in his father’s footsteps and enrolled in the army, seemingly abandoning hope of becoming an international cricketer.

“It was a hard decision at that time but internal politics forced me to quit and go for the second choice,” Alam told The Express Tribune. “I was also interested in joining the army as my father was there too.”

But once again the universe conspired against the man and 22-year-old Alam suffered a serious injury from a blast the first month of his posting in July 1999.

The multiple splinter injury left him needing 110 stiches and he suffered major artery damage in his right arm. “The doctors said that they will have to cut my arm in order to stop the increasing infection, but the damaged arteries were replaced through Micrografting and I was able to return to the battlefield with my arm intact,” said Alam.

Just seven months later, Alam was back among the fighting but yet again luck was not on his side. He was once again critically injured on June 21, 2000.

“I was in North Pakistan when I stepped on an Anti-Personnel Mine. I had no idea what had happened at the time, I just headed back to base,” he said.

What Alam had not realised was that the blast had claimed half of his left foot. “When I was informed about my injury I just had one thought on my mind and I asked the doctor whether I will be able to play cricket again,” he recalled. “My worst fears came true and the doctor said I will not be able to run like before.”

If one thing was clear, then it was that Alam was made of sterner stuff than regular men. When he was discharged in 2001 after five months on the treatment table, he had a surprise waiting for him back home.

“For a cricket lover what could be a better surprise than playing cricket just after returning home from a hospital?” he asked. “My friends had a cricket match arranged for me at a local ground and I went on to score a century.”

And hence the dream that was seemingly killed in the summer of 99 was revived once again. “I started practicing more and more from then on,” he said.

His cricketing skills were still as good as before and in 2002, Alam became the captain of the Army cricket team, competing in Grade II domestic events. He led the side for nine years, scoring many runs in the process before he was medically boarded out of the army in 2011 — bringing an end to his service.

In 2008, Alam tried out for the disabled cricket team, where he was selected as captain. Alam went on to score the first-ever century in disabled cricket in their first series against England, where Alam’s hundred was followed by another ton by the one-armed Matloob Qureshi as the pair put on more than 200 together.

“It really is an honour for me to make a record that can never be broken. It is like Majid Khan scoring the first century for Pakistan,” he said.

Alam has led Pakistan to victories in all three series the team has participated in — two against England and one against Afghanistan.

It has been a long journey, one filled with obstacles that would have demotivated many lesser men, but Alam has finally realised a dream that he had long given up on. Now he just wants it to continue as long as it can.