This Eid, MsT explor­es the trend of decora­ting animal­s for the days leadin­g up to their sacrif­ice
By Ans Khurram / Creative: Essa Malik
Published: September 21, 2015
Tweet Email 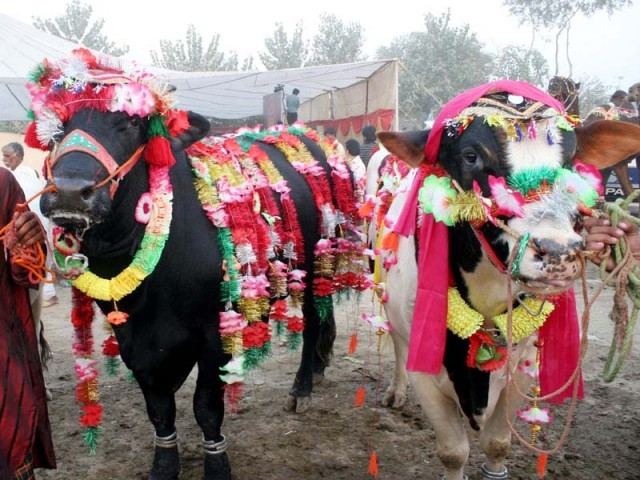 It’s that time of the year again when Pakistan’s urban centres are replete with goats, cows and camels up for sale. With Eid-ul-Adha right around the corner, bleating and mooing sounds have already integrated themselves into our surroundings. The streets are bustling with labourers and craftsmen from across the country, preparing to serve as make-shift butchers and children showing off their temporary pets before the impending sacrifice. Mothers have already taken to the kitchens, pre-cooking our favourite Eid delicacies to save time on qurbaani day.

Amongst the many interesting traditions we Pakistanis follow on Eid, perhaps the most exciting is the dressing up of the animals we purchase. From colourful trinkets to fur-dyes, our bakra mandis are packed with interesting animal accessories. According to 45-year-old Malik Shaukat who runs a pet store in Rawalpindi, the practice is in honour of Prophet Ibrahim’s willingness to sacrifice his son in the way of the Almighty. “Because the qurbaani is to celebrate his sacrifice, people express their sentiments by decorating their animals.” Malik’s colleague, 32-year-old Ali Niaz prepares and sells animal accessories during the weeks leading up to Eid. “In my experience it is mostly children who love to do this,” explains Ali, “They form a bond with the animals and usually drag their parents here to buy knick-knacks they can adorn their new friends with.” Sporting vivid colours like yellow, red and electric blue, the pieces stand out against the fur coat of the animals. In an agro-based economy like Pakistan, where many workers rely on the beasts of burden for their daily wages, animal accessories make for a lucrative business round the year. Modestly priced between Rs50 to Rs200, the accessories are often produced by the women folk of the villages the salesmen hail from. Much like Malik and Ali, these vendors bring them to cities along with the cattle to sell them at a profit.

Seasonal stalls like that of Ali’s offer a variety of accessories that can be placed on different parts of the sacrificial animals. One of the most sought after items is known as the gaani, a garland of sorts to hang around the animal’s neck. “These are handmade from cloth and are often embellished with flowers,” says Malik Shaukat, “They are used to adorn the necks of goats and cows as well.” The bigger animals like camels and bulls usually require the talgaare which covers their neck and forehead.

Ali points out another popular bangle-like article called the janjarey. “These circular metal rings are used to decorate the legs of an animal. When it walks, they also generate a pleasant clunking sound so you know the animal is coming,” says Malik. A similar item, the bell, is hung around the animal’s neck for a similar purpose. “In the villages, bells are attached to help the owners keep track of their cattle,” adds Malik. “In the cities, however, they are used more for decorative purposes only. I guess children enjoy the commotion created by janjarey and bells.”

But that’s not all! Also on offer is the moorakh (commonly called moor for short), which is a veil like structure with a leather strap that holds it in place. “The moorakh is attached to the face of a goat and generally covers the nose and the neck as well,” says Malik. The bigger veil is called a kalyaara. It is frequently accompanied by the maatha — a triangular piece of cloth whose edges are embroidered with shiny materials that goes on the forehead of cows and camels in particular.

Interestingly, the fashionable accessories aren’t limited to the animal’s attire only: there is a whole variety complimenting accessories. The waag dori, for instance, is a bright and more imaginative replacement for traditional ropes used to tie animals. The item is essentially a rope that is garnished with a variety of neon colours often weaved in different patterns. “At the end of the waag dori  is a metal hook which allows one to fasten their animal,” explains Ali. “Maalas are also used to adorn the necks of large animals,” says Ali, “Larrian are the lower flower garlands made of smaller flowers for smaller cattle, like goats.” For many customers, the colour of the animal’s coat is also extremely important. “I always ask my husband to ensure that the goat he buys for sacrifice is white,” says 29-year-old housewife Munazza Atif, who associates the colour with purity. “Plus the decoration items contrast nicely with a neutral colour like white.” Munazza’s husband, Atif, adds, “There is great value for animals that are naturally one colour. These goats tend to be more expensive as well. Personally, we prefer pure black or pure white.”

Who would have thought that the business of animal accessories, although seasonal, could be so lucrative? According to the Asian Correspondent, Pakistan sacrificed over 10 million animals at a cost of over $3 billion back in 2010. Clearly, the pre-Eid frenzy is an excellent opportunity for vendors like Malik and Ali to benefit from.

Ans Khurram is a freelance writer.