18-year-old recall­s the unfort­unate incide­nt she faced three years ago and how she's coping with it now
By Entertainment Desk
Published: September 11, 2015
Tweet Email 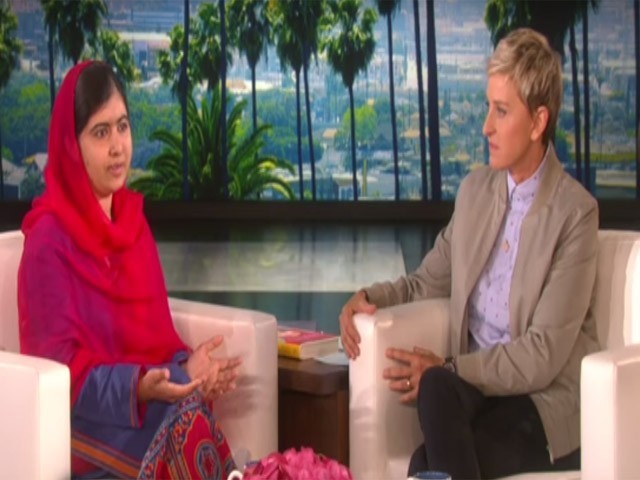 18-year-old recalls the unfortunate incident three years ago and how she's coping with it now. PHOTO: ELLENTUBE

When asked about her recovery after being shot in the face for her passion for education, Malala recalled how she had spent a week in coma and several months in rehabilitation.

Read: Ellen DeGeneres confirms Malala as a guest on her show

But back then, the 15-year-old focused on the plentiful support she received from across the world and moved on. She said she wanted to “forget about it, and continue life with more courage and more work”. She remains undeterred to date and said, “I strongly believe that nothing can stop me in this mission, in this campaign, of education, to say that girls deserve the right to go to school.”

Malala also revealed that she was unaware of the Nobel Peace Prize and was utterly surprised when her chemistry teacher told her.

The 18-year-old activist further said that she doesn’t feel ‘shy’ to remind the world leaders about their duties because she isn’t asking them to do something extra.

She also thanked her family especially her parents for their utmost support and letting her pursue her education.

Prior to appearing on the show, Malala met Bollywood actor Jackky Bhagnani in London on September 8.

Jackky — who was earlier trolled by twitteratis when he had written Malala’s name as ‘masala’ while congratulating her for the Nobel Prize — shared a picture on Twitter to inform his followers that he was in London to meet someone special:

I am here in London to meet a special person, someone who inspires me tremendously Guess who am I meeting?#StayTuned pic.twitter.com/ip9GCMIrtQ

He later tagged it as ‘From a mistake to a dream meeting!’:

From a mistake to a dream meeting! To my hero, thank you #Malala @ZiauddinY pic.twitter.com/Zf7xihhGQ2

The two also had dinner with Malala’s parents: