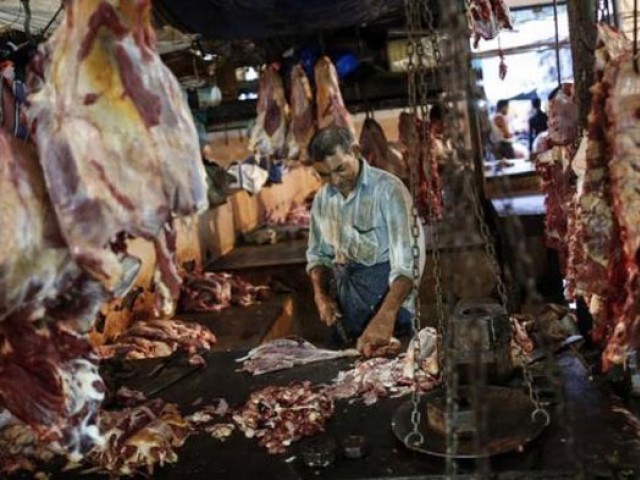 Kashmiri groups call for a shutter-down strike to protest against the ban. PHOTO: REUTERS

The Jammu and Kashmir high court ordered state police on Thursday to ensure strict implementation of a colonial-era law banning the sale of beef after a petitioner argued the slaughter of bovine animals hurt the sentiments of some communities, Hindustan Times reported.

The ruling comes in a year when several states have banned beef trade and cow slaughter, stoking an ever-swirling debate with several right-wing organisations supporting these moves while many minority groups and activists have termed such decisions a blow to personal freedom and India’s secular fabric.

Soon after the high court order some Kashmiri groups, including Yasin Malik’s Jammu Kashmir Liberation Front, called for a shutdown in the Valley on Saturday to protest the ban. “Although consumption of beef is less in Kashmir, there are some areas where it’s consumed daily. So I see no reason why this practice should not continue,” said moderate Hurriyat leader and the Valley’s head cleric Mirwaiz Umar Farooq. “It’s nothing but a political gimmick.”

Experts say the high court order is a reiteration of a section of the 1932 Ranbir Penal Code that is applicable in J&K, which says slaughter of cows and “like animals” is punishable with up to 10 years of imprisonment as well as a financial penalty.

A division bench of Justice Dhiraj Singh Thakur and Justice Janak Raj Kotwal instructed the director general of police to order top police officials of all districts and police stations to ensure there is no sale of beef in the state and stringent action is taken against violators.

The court was hearing advocate Parimoksh Seth’s public interest litigation (PIL) that said despite the Ranbir Penal Code provisions, bovine slaughter was rampant in the state. Advocate Sunil Sethi, spokesperson of the ruling Bharatiya Janata Party (BJP) state unit, represented the petitioner who is a member of the party’s youth wing. India is the world’s second-largest beef exporter after Brazil, but the BJP and its affiliates have been pushing for a nationwide ban on cow slaughter, as the animal is considered holy by many Hindus.

Home minister Rajnath Singh called for a countrywide prohibition on beef in March. “How can we accept that cows should be slaughtered in this country? We will do our best to put a ban on this, and we will do whatever it takes to build consensus.”