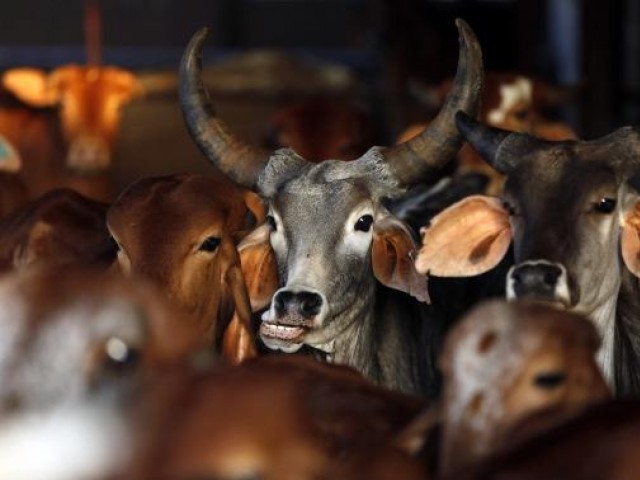 AHMEDABAD: A Muslim leader in India warned on Wednesday of communal unrest after a state government claimed the Holy Quran discourages eating beef, the latest contentious effort to protect cows in the Hindu-majority country.

The government of Indian Prime Minister Narendra Modi’s home state of Gujarat has erected billboards with an alleged Quranic verse saying eating beef causes disease, together with an Islamic symbol of a crescent moon and star.

Hardline Hindu groups have long pushed for a national ban on the slaughter of cows which they consider sacred.

But moves to protect cows have intensified since Modi’s Hindu nationalist Bharatiya Janata Party (BJP) came to power after general elections last May.

Several states have introduced a ban on slaughtering the animals and selling their flesh, a move that critics say discriminates against Muslims and other religious minorities who rely on the cheap meat for protein.

Shabbir Alam from the main mosque in Gujarat’s Ahmedabad city said the billboards were an insult to Islam because no such verse existed.

“Such hoardings can spark violence and disturb the peace between the two communities,” the mufti told AFP.

“Anything which is not from the Quran and publicised as part of the holy book is an insult to Islam. I strongly condemn this act of the Gujarat government.”

Gujarat has a history of communal violence, with riots leaving at least 1,000 people, mainly Muslims, dead in 2002 when Modi was then the state’s chief minister.

Vallabh Kathiria, chairman of the Gujarat government’s cow protection board, defended the posters put up around the state’s main city of Ahmedabad, saying he was quoting Islamic and other religious leaders.

India’s western Maharashtra state this year toughened a beef ban which criminalises even possession of the meat.

Its state capital Mumbai this week banned the slaughter and sale of meat for four days, following demands from the strictly vegetarian Jain community, sparking anger among meat eaters.

As Europe opens its doors, Japan considers clamping down harder on asylum seekers