The man had escape­d a police cordon at a train statio­n, but stumbl­ed and hit his head on the tracks­
By Reuters / AFP
Published: September 4, 2015
Tweet Email 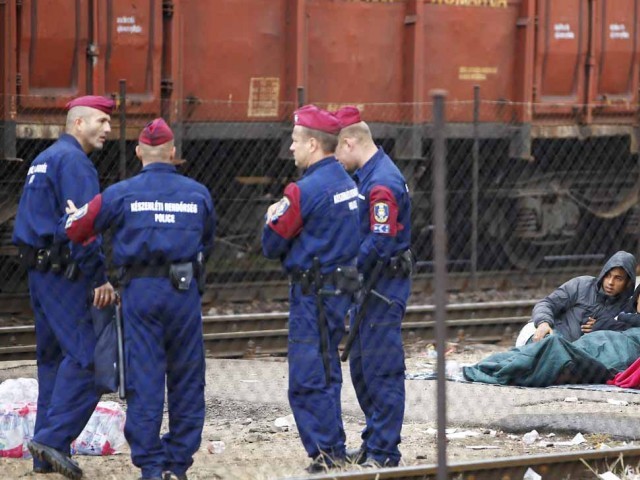 BUDAPEST: A Pakistani man died in Hungary on Friday after he fell and hit his head on the tracks while escaping from a police cordon at a train station in Hungary.

The 51-year-old Pakistani was found lying close to the railway track by emergency workers who tried to revive him for 50 minutes, the official MTI news agency said.

“A 51-year-old man has died in Bicske after ambulance staff were unable to resuscitate him,” Pal Gyorfi, a spokesperson for Hungary’s National Ambulance Service, told MTI.

A police spokesperson later confirmed to reporters that the man was Pakistani.

A statement on the police website said that the as yet unidentified man was among the 350 migrants who broke out from the train Friday afternoon, and he fell about 800 metres away from the train. Police said that they did not pursue the breakaway group.

State television said he had stumbled and hit his head as he ran down train tracks, however the police said that the cause of death was not immediately clear.

Hungary has emerged as the main entry point for migrants reaching the EU by land across the Balkan peninsula, nearly all of them seeking to press on to richer and more generous countries further north and west, especially Germany.

Migrants in Hungary, many of them Syrian refugees, broke out of a border camp, fled from a stranded train and struck out on foot for western Europe on Friday as a crackdown by the country’s right-wing government faltered in the face of overwhelming numbers.

Read: Even as refugees die, Hungarian PM tells Muslim refugees ‘not to come’

In chaotic scenes, hundreds chanting “Germany, Germany” streamed down the main highway from Budapest to Vienna; others sprinted down railway tracks, escaping a packed train held back by police for two days, while in the south they broke down barriers and wrestled with helmeted riot officers at an overcrowded border camp near Serbia.

The chaos contrasted with a vow by Prime Minister Viktor Orban to get to grips with Europe’s worst migrant crisis since the Yugoslav wars of the 1990s; parliament tightened laws that his government said would effectively seal Hungary’s southern border to migrants as of September 15.

Orban hailed “a different era”, but Friday brought more desperate scenes in a crisis that has left Europe groping for unity.