At least 102 people lost their lives and over 800 were injure­d last month due to heavy rain and floods­
By Iftikhar Firdous
Published: September 3, 2015
Tweet Email 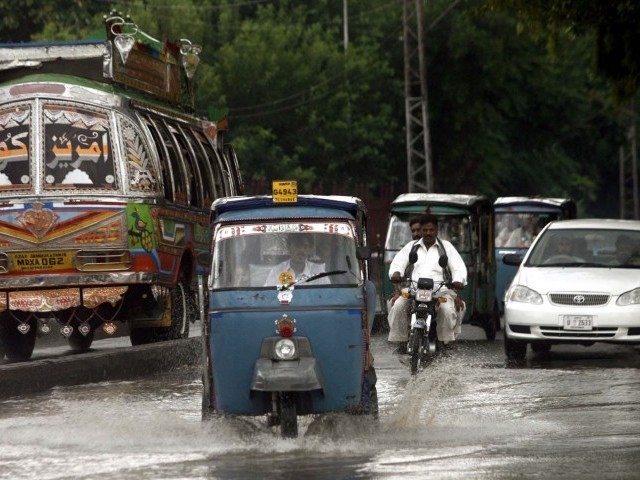 A rickshaw tries to navigate a flooded street in Peshawar after heavy downpour. PHOTO: PPI

PESHAWAR: Heavy rains in Peshawar killed five people while 30 others were injured after a storm continued into the early hours of Thursday across the province.

“The effects of climate change are more than evident and worrisome,” a senior government official told The Express Tribune. “However we have no mechanism in place to combat changes in the weather system or issue exact timely warnings,” he added.

Although a radar system was to be installed in two places for which allocations were also made in the budget, the entire project has been delayed.

“We are losing lives,” the official stated while revealing that at least 102 people lost their lives and over 800 had been injured last month due to heavy rain and floods.

Further, a multitude of families have been left homeless as the floods destroyed over 3000 houses.

“The fact that the only weather radar in Dera Ismail Khan is non-functional, means that Khyber Pakhtunkhwa and Fata are out of range of any form of weather forecast mechanism,” the source disclosed while adding that majority of weather alerts are issued by relying on search engines like Google and Yahoo.

In the most recent incident of torrential rainfalls and a storm where wind speeds between 35 -40 nautical miles per hour were recorded, the Pakistan Meteorological Department said about 47 millimetres of rain was recorded.

The harsh weather conditions disrupted the power supply in Peshawar leaving the district plunged into darkness once again. An official for the Peshawar Electric Supply Cooperation (Pesco) admitted that “the organisation does not have the ability to deal with such extreme weather conditions.”

Meanwhile the director of the meteorology department Peshawar, Mushtaq Ahmad Khan, believed that since heavy rainfall was expected during the monsoon season, the unexpected spells caused more destruction than expected as he confirmed that “it was predicted that this year would be rather dry.”

While the final reports of the total number of casualties is still being gathered from various parts of the district, a spokesperson for PDMA told The Express Tribune that damages are being assessed.

Though for now the city awaits its next rainstorm, without much cover.