59 killed in flood-related incidents across Khyber-Pakhtunkhwa

59 killed in flood-related incidents across Khyber-Pakhtunkhwa

Chitra­l seems to be the worst-hit with 35 report­ed deaths so far
By Ifthikar Firdous
Published: August 3, 2015
Tweet Email 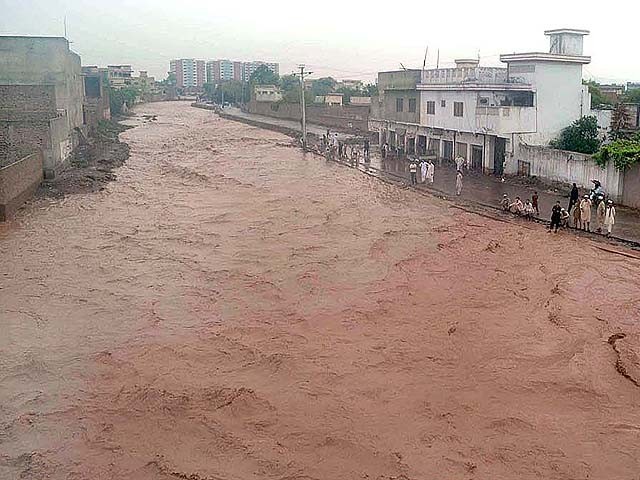 PESHAWAR: As rains and floods continue to ravage Khyber-Pakhtunkhwa, initial damages make for a grim reading, with at least 59 reported deaths across the province.

Chitral seems to be the worst-hit with 35 reported deaths so far and two injuries. Independent sources in the area, however, dispute the figure, speculating that the deaths and injuries are well beyond the government’s assessment.

On Sunday evening, the meteorology department issued another weather warning for Chitral, stating, “A severe weather system is likely to persist for next 3-4 days in Gilgit-Baltistan and Chitral, having the potential to produce Glacial Lake Outbrust Flood (GLOF), particularly in PMD’s pilot GLOF sites Bagrot, Bindogol and Golain valleys.”

The assessment shows that there are around 348 houses that are completely damaged in Chitral, whereas 77 houses are partially damaged, while 500 houses have been completely washed away in Lakki Marwat, leaving hundreds of families homeless.

“These are the initial assessments by the Khyber-Pakhtunkhwa government,” an official privy to the proceedings of the assessment told The Express Tribune.  “The weather system has still not stabilized,” he said.

The Metrological department showed that there was 217 mm of rains recorded in Cherat, the most in the province during the last 24 hours.

Monsoon rains began on June 16 and are continuing till date; however, a moderate moist current is penetrating into Punjab and Khyber Pakhtunkhwa up to 5,000 feet, according to the MET department.

The figures provided by the provincial disaster management authority (PDMA)  are from July 1 till August 3, 2015.

‘Should I step down?’ MQM chief posts poll on website