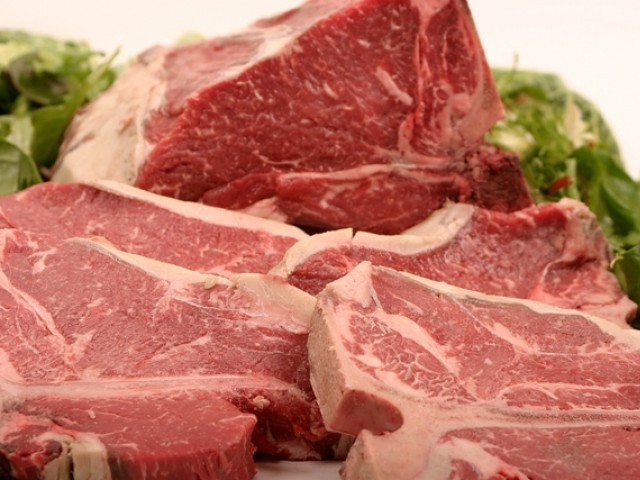 CDGL have not been able to put an end to the sale of substandard meat due to lack of effective coordination. STOCK PHOTO

Various departments responsible for ensuring the provision of quality meat including the Livestock and Dairy Development Department, the Punjab Food Authority (PFA) and the City District Government Lahore (CDGL) have not been able to put an end to the sale of substandard meat due to lack of effective coordination and absence of comprehensive laws, The Express Tribune has learnt.

CDGL’s Livestock Wing DO Rahat Ali said 15,000 kilogrammes donkey and horsemeat was confiscated in the city alone during the month of August. He said three illegal slaughterhouses had been sealed, seven vehicles used to transport meat had been impounded and cases had been registered against 135 people suspected of being involved in the practice. An official from the Livestock and Dairy Development Department said the department and the PFA had seized 10,000 kilogrammes of unwholesome meat in August. He said legal action had been initiated against 67 people in this regard.

Ali said that it was quite likely that such meat had been sold to citizens after being cooked. He said eatery owners tended to be the biggest customers of unwholesome meat. Ali said no mechanism was in place to nab people who consciously partook in procuring unwholesome meat and offered it for sale to citizens.  He said the practice had become exceedingly lucrative due to the great price differential between inferior and quality meat.

On Tuesday, the CDGL’s Livestock Wing had seized 280 kilogrammes of donkey and horsemeat. Though the CDGL called journalists in the wake of the development, it had failed to notify the PFA regarding the discovery.  An official from the Livestock and Dairy Development Department told The Express Tribune said the PFA should have been made cognisant of the development as it could have obtained information regarding customers of such meat. He said no mechanism was in place to facilitate the flow of information from those nabbed by police to the concerned departments.

Ali said a lack of adequate manpower had also been frustrating efforts to put an end to the practice. “There should be a separate wing for cracking down on elements involved in the trade,” he said. Ali said the city government had been tasking staff posted at hospitals for this purpose. “We need more people,” he said.

The official admitted to the lack of effective coordination among the various departments. He said it had been decided to establish pickets at all entry points to the city to curb the supply of carcass meat. Ali said teams composed of the Livestock and Dairy Development Department, the PFA, the CDGL, the Environment Protection Department (EPD) and police officials would man the check posts.

He said eatery owners had been flagrantly violating the department’s directives by having contractors procure meat on their behalf. Ali said the department would soon start inspecting eateries to inspect supply records. He said that a law to raise the punishment for those involved in vending of substandard meat was in the offing.

Livestock Secretary Naseem Sadiq told The Express Tribune that the suggestion to give cattle owners a handsome amount of money in exchange for carcasses was being considered. He said it would be placed before the Provincial Assembly soon. Sadiq said a Rs3 million-fine would be imposed on those suspected of causing the demise of a person following consumption of substandard food in addition to a 10-year prison term.

The secretary said there would be a marked improvement in the situation following the implementation of an amendment to The Punjab Slaughter Control Act 1963. He said those involved in selling carcass meat would be fined Rs0.5 million in addition to being imprisoned for eight years. Sadiq said the offence would be made non-bailable following the implementation of the amendment.