Why 25 million children are out of school in Pakistan

Why 25 million children are out of school in Pakistan

By the end of this year, Pakist­an is likely to miss each one of its Millen­nium Develo­pment Goals (MDGs)
By Azam Khan / Creative: Aamir Khan
Published: August 31, 2015
Tweet Email 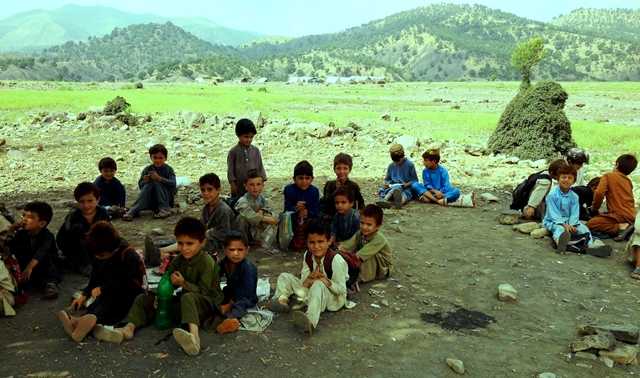 Pakistan is facing tremendous challenges in the education sector, with 25 million children not attending schools at all. Official record shows that this figure has remained mostly unchanged since 2005.

Improving school enrollment lies at the forefront of Pakistan’s battle to improve education.

Sharing data and figures, educational experts are of the opinion that come December 31, 2015, Pakistan would have missed each one of its Millennium Development Goals (MDGs) to achieve universal primary school access, improve retention in school and increase adult literacy.

As per the Pakistan Social and Living Standards Measurement Survey 2013-14, Pakistan’s progress on the education front has been severely lagging, given that it has not achieved any of the targets set for 2015 in all three indicators: to improve literacy rate, retain enrollment and increase net primary enrollment.

Currently, the literacy rate in Pakistan is 57%, while the target was to increase it to 88%. It was also pledged that the survival rate of enrolled children from Grade 1 to 5 would be brought to its maximum, but the retention rate is currently only 67%. Similarly, the net primary enrollment is 58% in Pakistan and the target of 100% remains a distant dream.

Furthermore, experts have said that the figure of 25 million children not enrolled in school could not be reduced for the past decade given the increase in population. In the 2015-2016 budget, the combined federal and provincial allocations for education are almost Rs734 billion. This constitutes 2.68% of the GDP, an embarrassingly low amount when compared to other countries in the region.

The latest plan of Prime Minister Nawaz Sharif’s government is to enroll six million children between the ages of five and nine years in school. The National Plan of Action 2013-2016 has a budget of Rs188.7 billion ($1.7 billion). It includes incentives to control dropout rates, build new schools, add classrooms and train teachers in existing schools.

As per the National Education Management Information System (NEMIS) 2013-14 report, there are 11, 096 government schools in Pakistan which do not have buildings and students have no option but to sit on floors.

Saman Naz, the data and evidence campaign manager at non-profit Alif Ailan, a campaign to uplift education in Pakistan, says there is no authentic data regime in the country due to which officials are in a state of denial as far as the number of out-of-school children is concerned.

She adds that successive governments have failed to take any concrete steps due to which the alarming figure has not subsided. The few small initiatives, taken particularly after the devolution of education to provinces, were also unable to ensure any significant change.

According to her, despite the inclusion of article 25A in the Constitution (which calls on the State to provide free and compulsory education to all children aged five-16 years in such manner as may be determined by law), there has not been any progress on this provision and provinces have yet to frame legislation to implement it.

Chairman of an alliance of teachers in Khyber-Pakhtunkhwa (Mutahida Mahaz Asatiza) Abdul Manaf Khan believes that successive governments’ incompetence is the only reason for the educational crisis in Pakistan. Rampant corruption in government departments further worsens the situation, he adds. Kaiser Bengali, an education expert from Sindh, said that Pakistan is good at setting ambitious targets but inept at following through.

Successive governments have abandoned policies of the previous administration and adopted new and more ambitious targets, wreaking havoc on the education system and squandering millions of dollars, Bengali said. As a result, Pakistan has failed to achieve the United Nations’ Millennium Development Goal of primary education for all children by 2015.

Minister for Elementary and Secondary Education in Khyber-Pakhtunkhwa Muhammad Aatif Khan, meanwhile, pointed at a few steps his ministry has taken to overcome the crisis. He said that an effective monitoring mechanism has been introduced to check the teachers’ absence.

These include the Tameer-E-School, a fund raising campaign was launched by the K-P government to upgrade schools, he added. Provincial authorities also claimed that in the first of phase of its campaign #GharAyaUstaad , 400,000 children were brought back to schools and the same target has been set for the second phase of the campaign, which will commence in fall.

However, the government remains tight-lipped on its exact plan. Mehbool Elahi Butt, who headed the government’s campaign for the uplift of education, while working for the National Commission for Human Development, said Master Ayub is a success story, as he was spreading awareness and knowledge informally, but the overall performance of the government departments is dismal.

“With the current pace, we will not able to achieve set targets even during next 20 years,” he concluded. A view of a school in Sokal, which was burned down, forcing students out. PHOTO: AZAM KHAN

Moreover, many schools are built at a distance from residential areas in some parts of the country, and are not accessible for children. Hazara is said to be a relatively secure division of K-P, but other factors, such as unsuitable terrain, cause children to stay home. A government primary school built on a hill located at Munnim village near Haripur has a total number 12 students only, says Qazi Zahid Iqbal, a reseident of the area.

Iqbal says it is not possible for minors to walk on such a steep height. A few months ago, a student fell and broke his elbow on the hill. Iqbal also recalls the time he sustained head injuries after falling on the hilly path leading to the school when he was a student. Similarly, authorities declared a Government’s Girls Primary School in Khoi Nara, a village of Haripur district near Khanpur Dam, as vulnerable and it without any suitable alternate arrangements; thus, forcing girls to stay at home. Under temporary arrangements, a rented house was arranged to serve as a school building; however, the school staff and students were evicted this Independence Day after the government failed to pay rent.

In the same vicinity, a government high school for boys was built in Mang village some seven years ago but to date not even one class has opened. In fact, the owner of the property has turned the school building into a stable. The government spent over Rs10 million on its construction but no one has actively pursued opening the school.

The roof of a government middle school at Sokal village in Mansehra district burned down two years ago at night. Over 100 students enrolled in the school were forced to look for new options. Although a generous resident of the village stepped in and offered his home for temporarily classes, after the eighth grade, students will be leave with only one option: the nearest Government High School at Siaki, which is at least five kilometres away from the middle school and there is also no road to link the two. The current spell of torrential rains has wreaked havoc across the country, forcing many to flee their homes owing to flooding. While the capital remained mostly secure, the structure of a small school for street children in a slum gave way in the first week of August.

Despite this, the children sit under the open sky to receive an education.

For last three decades, the 58-year-old has been teaching underprivileged street children at a vacant plot near capital city’s elite area Super Market in his free time. The number of students fluctuates between 100 and 300 throughout the year.

For his decades-long struggle for education, Ayub was conferred the ‘Pride of Performance Award’ by President Mamnoon Hussain this year. But despite ample media coverage and official recognition, Ayub is still worried. He believes his cause is neglected and the future of his students remains uncertain.