As waters recede, some flood-hit people start returning to their homes in Punjab, Sindh

As waters recede, some flood-hit people start returning to their homes in Punjab, Sindh 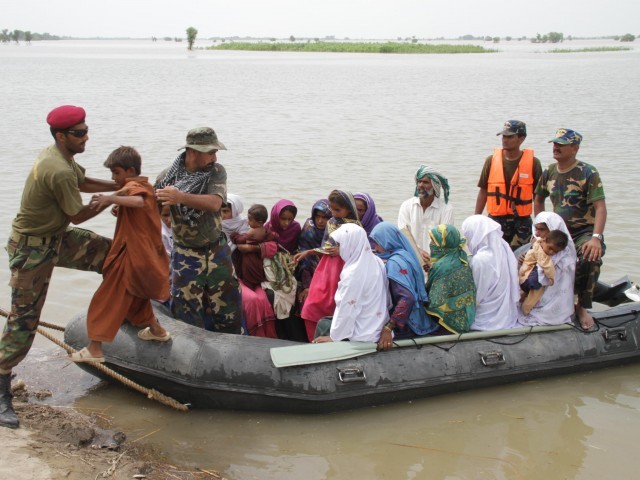 As waters recede, some flood-hit people are starting to return to their homes in Punjab and Sindh, according to National Disaster Management Authority (NDMA) data.

The number of people in relief camps established in Punjab has plummeted from 10,615 to 65 in the past 10 days, as people start heading back.

The United Nations’ Office for the Coordination of Humanitarian Affairs (UNOCHA) also confirmed that, “Flash floods hit eight districts of Punjab, affecting an estimated 463,902 people. The situation has stabilised and affected populations are returning from temporary camps.”

#Pakistan: our latest update on the impact of the floods (as of 23 August 2015) http://t.co/bMVlKutQhh pic.twitter.com/Yh8bY7mjSu

While some people in Sindh have started returning to their homes, high, though receding waters at Kotri mean that a very large number of people are still stuck in camps. Those in camps rose from 217,174 10 days ago to peak at nearly 350,000 late last week. But it has since come down to 329,877 in the past two days.

According to the flood forecasting division of Meteorological Department in Lahore, all rivers and nullahs were flowing normal across the country apart from River Indus at Kotri.

Flash floods have so far affected 1,529,189 people across the country since mid July.

The floods have also affected 4,065 villages in the country, leaving 224 people dead and 201 injured.