Volunt­eers in Pakist­an and India came togeth­er to feed the homele­ss on both sides of the border this Indepe­ndence Day
By Komal Anwar / Creative: Maryam Rashid
Published: August 23, 2015
Tweet Email 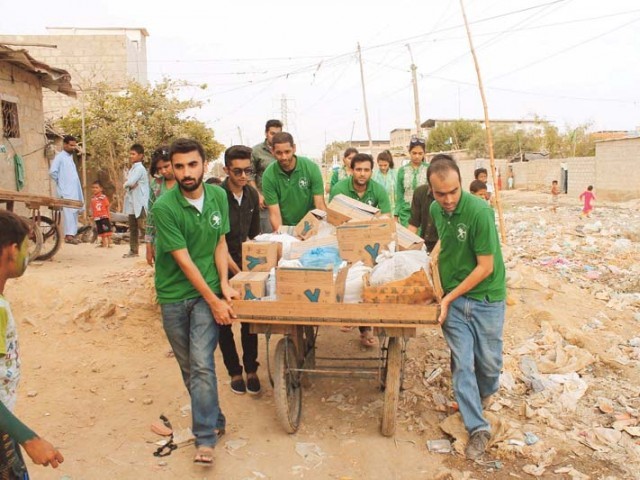 Volunteers from the Robin Hood Army in Pakistan distributing food to the residents of Bilal Colony in Karachi. PHOTO CREDIT: ABBAS MAHMUD

For those who think Indians and Pakistanis can’t work together without animosity, here’s some food for thought: on August 14 and 15, Robin Hood Army (RHA) — a team of over 2400 volunteers — launched #Mission100k, an ambitious campaign that spanned Independence Day in both countries and aimed to feed 100,000 people in India and Pakistan. The campaign used social media to mobilise volunteers in both countries and collaborated with food catering companies and restaurants to bring un-used food to the needy.

RHA was set up in India in August 2014 by two young men, Neel Ghose and Anand Sinha. The Pakistani arm of the organisation was founded by Sarah Afridi and Sarfaraz Abid. Afridi and Ghose studied together at the London School of Economics. “After looking at photos of the Robin Hood Army in India via Facebook, I was very excited and reached out to Neel to start a Pakistani chapter of the organisation,” explains Afridi. Incidentally, RHA was set up in Pakistan on the day of the nail-biting ICC Cricket World Cup match between Pakistan and India in February 2015. “Since 15th February, 2015, the RHA has fed almost 15,000 people in 34 distribution programmes across Karachi,” says Afridi. RHA uses three kinds of food from restaurants: leftovers, surplus food and materials such as leftover dough that can be used to make items such as pizza and fresh food. Contributing restaurants include Shaikh Abdul Ghaffar Kebab House, Nandos, Pane & Amore, White Biryani, Espresso, Lal’s Patisserie, Zahid Nihari, Pie in the Sky, Cosmopolitan and Golden Dragon. The team coordinates with restaurants in Karachi over the weekend and collects the food on Sunday mornings. If a restaurant is unable to store the food, the two RHA co-founders offer to keep it in their own homes. The RHA works out locations for distribution drives during the week and then finalises arrangements with the restaurants.

On August 14 this year, RHA fed people in Karachi, Lahore and Islamabad. In Karachi, three teams of over 60 volunteers fed 5,650 people in Bilal Colony, at Jinnah Postgraduate Medical Centre, the National Institute of Child Health, Cantt station, Sahara village, Mashal orphanage and Khadda market. Volunteers gathered on the morning of the 14th wearing green-coloured clothes — the girls wore kurtis, while the boys wore green T-shirts. They sang patriotic songs while distributing the food and some volunteers painted flags on the faces of children who gathered for a meal. “We do not get free food anywhere in the city,” said Gulshad, one of the residents of Bilal Colony. “During Ramazan, these volunteers gave us biryani and biscuits. I have seven children to feed and my husband earns Rs10,000 a month, so it’s not easy.”

“I spoke with Sana about my desire to give money to charity and she told me about the work RHA is doing,” said one volunteer, Abbas Mahmud. Mahmud joined RHA during a food distribution programme at the Al-Madad Foundation School and decided to volunteer with the group. Another volunteer, Sana Rizwani, explained that her motivation to join RHA comes from a desire to see different segments of Karachi’s population united. “It is important to have such a medium through which society can integrate,” she added.

In Lahore, two RHA teams of 20 volunteers fed over 500 people sandwiches and other bakery items. In Islamabad, a group of 10 volunteers carried out the first food distribution programme in the city by feeding 65 people near Rana Market. Across the border in India, RHA volunteers fed nearly 40,000 people in 14 cities. According to Aarushi Batra, Social Media Head of RHA in India, the number may be much higher as many colleges and offices participated in the food distribution independently. A resident of Bilal Colony celebrating Independence Day with her face painted with the Pakistani flag. PHOTO CREDIT: HEBAH AFRIDI

The Indian and Pakistani volunteers have their own way of choosing where they will distribute the food. “We carry out what is known as ‘scouting drives’, wherein we go out on the streets of a city and just drive around to find clusters of homeless or less fortunate people,” explains Batra. She adds that once a cluster (a slum, an area under a bridge or flyover, in orphanages or shelter homes) is identified, the volunteers then speak to the people to find out about their day to day lifestyle. Volunteers also find out the age groups of the people living in these clusters, and children are often given additional food items like fruit or biscuits.

“In Pakistan, we have found clusters of homeless people around mazars and occupational beggars on the street,” explains Afridi. “We head to government hospitals, slum areas, orphanages and shelters to make sure we are reaching the most needy and deserving people.” She adds that the organisation currently has the support of 16 restaurants in Karachi. “We manage to get food for 150 to 400 people from the contributions of restaurants, but if we visit slum areas where the cluster of people is larger, we try to arrange for additional food ourselves,” Afridi explains.

Afridi says it is a challenge to match demand and supply, as restaurants are not always able to guarantee the amount of left-over food that they can donate. RHA co-founder Sarfaraz Abid adds that the group is constantly trying to get more restaurants to contribute food in order to reduce wastage as much as possible and to have a surplus of food to distribute. “We don’t take monetary donations but are always open to food donations, depending on the need,” Abid says. RHA consciously avoids monetary donations in order to rule out any misuse of funds by volunteers as well. Meanwhile in India, Batra says that food is consistently available from restaurants and a steady flow of volunteers, or ‘Robins’, ensure that the food reaches the homeless. “We sometimes face logistical challenges due to the overwhelming crowds of homeless people in the areas we visit,” Batra adds.

RHA’s Pakistan team plans to increase the number of volunteers and restaurant partners over time, while also getting schools, colleges and universities on board. At the moment, volunteers must join through a referral system of sorts, as Afridi and Abid must ensure the security of all team members. However, the two hope to create a core team of volunteers in Karachi soon. “There’s a lot of crime in neighbourhoods where the government doesn’t look out for people or when people aren’t able to make ends meet,” explains Afridi. “I think one can make society better by making different people care for others and RHA is trying to bridge the gap between those who are fortunate and those who are not.”

Komal Anwar is a subeditor at The Express Tribune magazine desk.