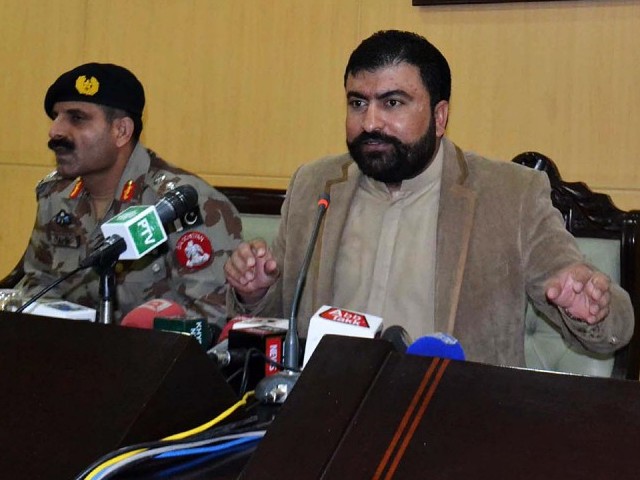 QUETTA: Terrorists took up sanctuary in Balochistan after abandoning their camps in North Waziristan Agency in the wake of the military operation codenamed Zarb-e-Azb, the provincial home minister, Sarfaraz Bugti, said on Sunday.

“Terrorists entered Baloch­istan via South Waziristan Agency when the military launched an operation against militants in the Federally Administered Tribal Areas (Fata),” he said in an interview with APP on Sunday.

Read: Army gearing up for final push in Shawal Valley

A number of insurgents came through Zhob and other areas of the province that border the tribal belt and Khyber-Pakhtunkhwa. “We, however, took swift action to apprehend these anti-peace elements and to stop their influx into Balochistan,” he said.

He said that when the military destroyed strongholds of terrorists in North Waziristan and South Waziristan, most of them established their new hideouts along the Pak-Afghan border, both in Khyber-Pakhtunkhwa and Balochistan.

However, the Balochistan government was busy tracking down and eliminating terrorist rings. “Following intelligence information, we carried out security operations against terrorists in Zhob, Sanjawi, Dalbandin and other areas to destroy their new network,” he said.

The home minister pointed out that Operation Zarb-e-Azb has also helped restore peace and maintain law and order in Balochistan. “Local networks of militants who also had links with the banned outfits operating in Fata. When the military destroyed the hideouts of militants in Waziristan, it also weakened militant organisations in Balochistan,” Bugti explained.

Read: A year on, 2,763 militants killed in Operation Zarb-e-Azb

Bugti said the government had adopted a zero-tolerance policy against terrorism to make Balochistan a peaceful province.

Pointing out irony: Pervaiz Rashid hits out at Imran Khan