The farce at Gurdaspur and the war of perceptions

The farce at Gurdaspur and the war of perceptions

Indian establ­ishmen­t not only follow­s a danger­ous strate­gy, its taking leaf from a book that long lost its releva­nce
By Shahzad Chaudhry
Published: August 8, 2015
Tweet Email 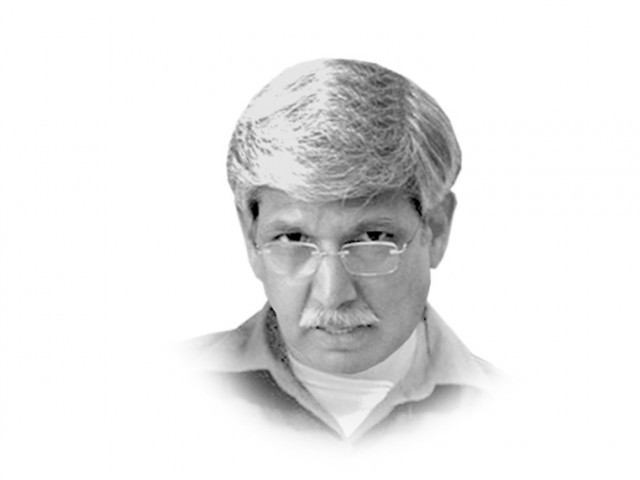 Ravi was in flood, especially after excess rains in its catchment areas in India and in the various rivulets and streams that feed the river in Pakistan. Ravi crosses into Pakistan just below the Madhopur Headworks near Kathua in India and continues to meander either side till finally settling down in Sialkot, Pakistan, where it then becomes a fixed geographical border. The tap to the flow in this river is in India; unless it rains and despite when it rains. As was the case on July 27, 2015 when because of incessant drench, the river was swollen and flooded. This was also the day when certain terrorists attacked the small town of Dinanagar in Gurdaspur, India, after having allegedly infiltrated from Pakistan. Despite the abnormal rains this year in both countries, someone had chosen to push in three terrorists across the Ravi to attack a sleepy police station in the equally sleepy town of Dinanagar.

Just above from their alleged point of braving across the raging Ravi lies a better target than Dinanagar — the Indian Air Force station of Pathankot. Anyone looking to make a statement through audacity of aggression could have been far more effective taking on the Base than a sleepy town. Granted that the Base would have been better defended, but what then was the intended purpose of such aggression? To kill six unsuspecting policemen of a sleepy Punjab town? What statement did that make? Surely anyone going in was meant to fight till death and cause maximum damage. Why then choose a target which will incur irrelevant damage? The planners of this operation clearly wished Pathankot to escape harm.

A few more pearls from the planners’ genius: the GPS was provisioned for each of the attackers, it now appears, to enable easy reconstruction of the route and their origin. It is almost hilarious given that even the cows on either side know the terrain so well as to navigate their way in and out of the controlled border without the 21st century contraptions. Or, perhaps it was a flooding Ravi which forced them to rely on the GPS. Cross, allegedly, they did.

Having successfully waded their way across the raging Ravi — no mean feat — they now hit the railway line which runs parallel to the border, a slight distance away; and walked along it to the town of Dinanagar. What happened to the GPS if a contour was finally to lead them into the town? And under a pervasive danger that a train just might chance on them? The DG of police who briefed the entire story — pieced immediately after the three terrorists had been put down after an 11-hour gunfight — somehow knew that the three knew the train timetable well and chose the hour when a train was not expected! Next, as they came to the railway line, they buried three bombs weighing 5kg each under the track to destroy a train that wasn’t expected. And then conveniently left a night-vision goggle at the scene to identify the location where the bombs could be discovered by the police; all within the 11 hours of the gunfight. By midday, the ISI was once again under Indian crosshairs. The gunfight still raging. More elaborate attention to detail may not have been seen other than in an excellently scripted screenplay for a Hollywood thriller. In Bollywood though, they still miss out on the finer details.

Dispensing the three bombs also helped reduce the backpack load to a more bearable 50 pounds that the three could now carry for the next 15 miles. Once there, they announced their arrival by firing randomly into the town and then jacking a small Maruti to their final destination, the police station, which they knew well despite the GPS. There, they held out the police and the Indian security forces for the next 11 hours till they too vanished in a wild west ending. This is mostly out of what the Punjab Police Chief Sumedh Singh Saini briefed on the incident. The best of Saini came in the end, confirming that: “They (militants from Punjab) themselves have failed to revive terrorism in Punjab, so they are in touch with their counterparts in J&K”. And mind you, he is talking of the Indian J&K; not AJK.

For the next three days, the Indian media went hysterical, invoking Mumbai and framing Pakistan as the sponsor of Gurdaspur. This lived on for three days, then dying a natural news-cycle death and reaching its fated implausibility as a yarn. Ufa wasn’t yet cold when the Indian BSF unleashed its rain of fire and death across the established border that Pakistanis call the Working Boundary and Indians the international boundary. By the Indian claim then India violates the inviolable whenever it fires across into Pakistan. Gurdaspur followed soon after. Nothing that India does is not deep, even if hilarious in enactment.

When Nawaz Sharif received a bad press on his return from Ufa, voiced mostly by the usual suspects, the Indians could only think of fishing further to reinforce the divide between the civil and the military. The firings across the boundary, and Gurdaspur, came in an accompanying tirade by the Indian media framing the Pakistan military as an aggressor in a message meant to convey the military’s dissonance and displeasure with the Sharif approach towards India, denying him the liberty to proceed with the mission of peace. While Bollywood may not be as detailed, those in the business of statecraft in India are surely no novices, though they remain transparently errant at times.

As I pen this piece, the bombings from across the border go unabated with a reported loss of life again. This comes about only two days after India has invited the Pakistani NSA to visit India per decisions in Ufa between the two prime ministers. Clearly, such exchange of fire following an appeasing political move is meant to reinforce the perception to the Pakistani civil society that the Pakistani military invests in hate even as the politicians and the diplomats on both sides yearn for peace. The Indian media is once again abuzz with Mumbai; raking the past and stoking the fires. Call it the war of perceptions, farcical or theatrical, but loaded against the march of time. This Indian establishment not only follows a dangerous strategy, it is taking a leaf from a book that has long lost its relevance. Twentieth century thinking cannot resolve 21st century challenges.