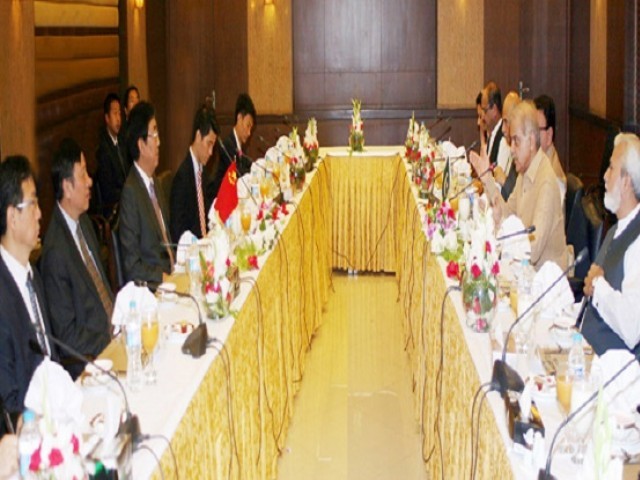 Cooperation between the two countries in agriculture and science and technology was discussed during the meeting. PHOTO: NNI

Cooperation between the two countries in agriculture and science and technology was discussed during the meeting.

Chief Minister Shahbaz Sharif said the friendship between Pakistan and China had withstood the test of time.

He said a new era of economic cooperation between Pakistan and China had started under Prime Minister Nawaz Sharif.

Sharif said the Orange Line Metro Train was being built in Lahore with the cooperation of China.

He said the government wanted to cooperate with Jilin province in agriculture, auto industry, railways, metro trains and vocational training.

The chief minister said Jilin’s auto-industry could set up units in the Punjab. He said a delegation from the Punjab would soon visit Jilin.

World Bank for South Asian Region Vice President Annette Dixon was also present.  Indrawati said the World Bank would extend cooperation in projects for empowerment of the youth. The chief minister told her that the government wanted to ensure 100 percent school enrolment by 2018. He said reforms were being introduced in higher education. He said tax collection institutions were also being strengthened. Shehbaz Sharif said iron ore and copper reserves had been discovered in Chiniot. He said World Bank could provide assistance for survey of the mineral reserves.

Clogged streets: Protest against WASA for not draining rainwater