Scenes of chaos: Over a hundred homes bulldozed in capital’s slum

Scenes of chaos: Over a hundred homes bulldozed in capital’s slum 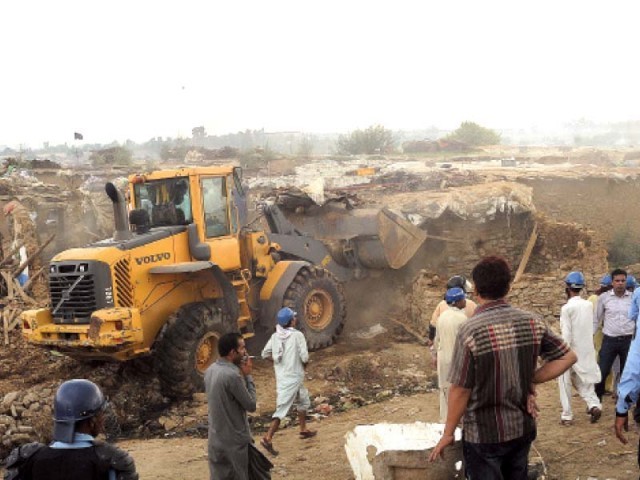 A bulldozer razes a slum to the ground. A policewoman removes infants from a home. A terrified child cries as a woman pleads to a policeman in the background. A security official fires teargas shell at protesting dwellers. PHOTO: ONLINE/WASEEM NAZEER/EXPRESS

The Capital Development Authority enforcement wing and hundreds of police and Rangers personnel on Thursday successful entered and demolished around ten per cent of the city’s largest illegal slum – Afghan Basti in Sector I-11/1.

In the first phase, nearly 150 illegally-constructed houses were demolished using a fleet of bulldozers and other heavy machinery, said CDA Enforcement Director Hamza Shafqat, while  confirming that operation against illegal settlement would continue today (Friday).

On Thursday afternoon, the slum and its adjoining roads descended into chaos after slum dwellers began pelting stones at the police and CDA officials. Policemen in riot gear fired tear gas in response.

Residents later attempted to physically resist as well, but baton-wielding policemen subdued them and dragged them into police vans, as they adamantly said they would not give up their homes.

Over a dozen officials including an assistant commissioner, a magistrate, a policewoman, and a few policemen and CDA officials received minor injuries due to the stone pelting.

According to PIMS spokesperson Dr Ayesha Raisani, some 13 men had been brought to the hospital with “minor to moderate” injuries. Raisani said all of them were discharged after receiving basic first aid. There were reports of another three slum dwellers being shifted to hospital after they passed out due to the teargas.

Earlier, in the morning, the police cordoned off all roads leading towards the slum. The roads were reopened for traffic after the conclusion of the operation at around 7pm.

The administration initially offered the slum dwellers the option to voluntarily vacate some 230 plots which were allotted to individuals some 25 years ago, but were never handed over to the allottees due to the presence of squatters.

Upon refusal, the police and civic agency officials took action and started a cleanup operation.

One-by-one, the CDA razed some 150 shacks and houses. The CDA teams were busy still clearing debris when this report was filed.

Slum dwellers claimed that they were not given enough time to remove their valuables from their houses, but Inspector General of the Islamabad Police Tahir Alam Khan said the residents were asked to voluntarily leave the area three days back.

He said that not a single bullet was fired in the operation.

CDA spokesperson Ramzan Sajid said in the first phase, nearly 230 plots had been retrieved from adverse possession. “After demarcation, plots will be handed over to allottees that have been waiting for possession of their land for the past two decades,” Sajid said.

In 1985, the government allowed nearly 400 Afghan refugees to settle along a seasonal stream passing through the area. With the passage of time, the slum grew, mostly through internally displaced persons from K-P and internal migrants from Punjab. A UNHCR survey carried out in 2013 estimated that over 8,000 people live in the slum.

The Afghan Basti was previously cleared in 2005 after a massive eviction operation carried out by the CDA and the ICT Administration on court orders. But it was back up and running by 2007.

Aasim Sajjad Akhtar, Punjab president of the Awami Workers Party (AWP) — which strongly opposing the eviction drive — said the AWP considers today’s action to be an example of class warfare by the rich and powerful against the working poor.

He further condemned the excesses of the police, Rangers and CDA, all of whom, he said, acted beyond the ambit of the laws by using brute force against a helpless population.

“The AWP also condemns the PML-N government, in particular Chaudhry Nisar, for pursuing this brutal operation and staying true to its reputation as an anti-people and anti-poor political force,” he said.

Sabzi Mandi police arrested 58 people including ten women and 13 children, said a police official. There were also scenes of policemen and women dragging away women and elderly men.

The protesters were being held in different police stations and they would be produced before courts on Friday.

Islamabad Deputy Commissioner Capt (retd) Mustaq Ahmed said negotiation between locals and the administration were successful, but “residents of other slums” came and tried to create unrest, which led to the clashes.

“Those who showed resistance seemed to be outsiders,” he claimed. He said administration will submit an operation report before the IHC on Friday (today) and a future strategy will be devised accordingly.

On Wednesday, some controversial photos purportedly showing the body of an infant wrapped in a carpet were circulating on social media. Another photo shows I-11 slum dwellers can be seen offering funeral prayers for an infant. The alleged victim was claimed to be a six-day old boy who died due to suffocation as a result of teargas shelling by the police.

No police, CDA, hospital or other independent sources would confirm the authenticity of the pictures.

“It’s a pack of lies and an effort to generate controversy,” said a CDA spokesperson.