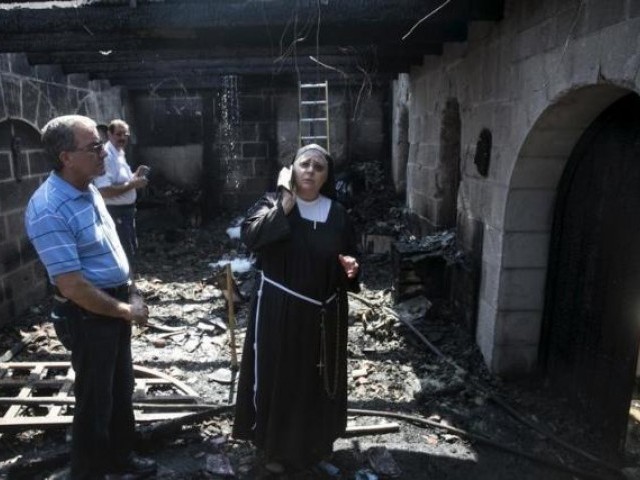 A nun stands at the scene of a fire in the Church of Loaves and Fishes on the shores of the Sea of Galilee in northern Israel June 18, 2015. PHOTO: REUTERS

JERUSALEM: Two Israeli men, described by authorities as Jewish extremists, were charged on Wednesday with torching part of a church at the site where Christians believe Jesus performed the miracle of the loaves and fishes.

The June 18 arson attack followed more than 40 suspected hate crimes committed against churches, mosques and monasteries in Israel and the occupied West Bank and East Jerusalem since 2009, with only a handful of indictments handed down.

In a statement, Israel’s internal security agency, Shin Bet, identified the two suspects, aged 19 and 20 and wearing Jewish skullcaps in court, as followers of an “extremist ideology” that believes that “only someone who fights Christianity … can call himself a Jew”.

No pleas were entered during the court hearing in Nazareth.

The limestone Church of the Multiplication of the Loaves and Fishes, on the northwest shore of the Sea of Galilee, was constructed in the 1980s and is overseen by the Benedictine Order.

It was built on the site of 4th and 5th century churches that commemorated what Christian faithful revere as Jesus’s miraculous feeding of 5,000 people with five loaves of bread and two fish.

The fire damaged the church’s roof, and a verse from a Hebrew prayer denouncing the worship of “false gods” was spray-painted in red on a wall.