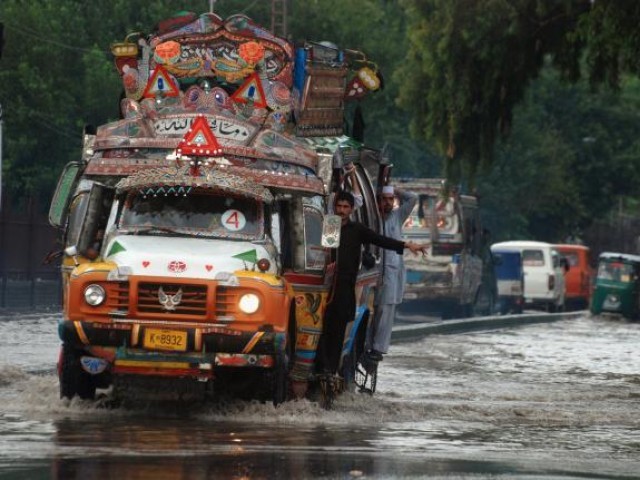 A bus passes through the flooded streets of Peshawar, July 23, 2015. PHOTO: REUTERS

Flash flooding caused by torrential monsoon rains has killed at least 15 people in different parts of Pakistan and affected hundreds of thousands of people, according to the National Disaster Management Authority (NDMA). Aid agencies, however, put the toll higher.

Glacial lake outburst flood (GLOF) in Chitral have left at least three people dead, in addition to extensive damage to property and infrastructure, affecting more than a quarter of a million, the NDMA and EU’s humanitarian office said.

“Some villages have been cut off from the rest of the district,” said Shah Fahad Ali Khan, 27, a university lecturer living in Zargrandeh, a village in Chitral.

People in flood-prone areas have been shifted to safer ground, he said on Friday in an online message.

According to the NDMA, 151 houses and 30 villages have been damaged, while 13 bridges and three roadways have been affected. The Reshun Powerhouse too has suffered damage, affecting power supply.

Among key arteries damaged in Chitral is the Chitral-Garam Chashma road, of which as much as eight kilometer stretch of which was washed away. According to the NDMA, it will take “months to restore.”

The army has so far rescued 272 people using helicopters while as much as 47.5 tonnes of relief goods and food has been dispatched to the affected region.

Heavy rains are expected over the weekend, which may cause more flash flooding and could trigger landslides in Khyber-Pakhtunkhwa, including Chitral, the meteorological department said earlier this week.

In Khyber-Pakhtunkhwa, 51 houses were damaged in Tehsil Tangi, District Charsadda due to rains and landsliding. At least one person has been reported as missing.

As many as three people have died and four others have been injured in Punjab where 231,915 people have been affected with floods in River Jhelum and Indus.

Authorities have so far evacuated 57,461 people from flood affected areas, with the army rescuing 13,893 people.

The metrological department expects flow in River Sutlej at Ganda Singh Wala to increase substantially over the next two days.

Scattered rain of modest intensity is also expected over Sindh and upper catchments of all the major rivers along with Punjab, Khyber-Pakhtunkhwa and Northeast Balochistan.

At least two people have died and one was injured in Ghanche area of Gilgit-Baltistan, as the NDMA issued fresh warnings of rains and GLOF in Bagrot valley.

Flooding in Diamer, Astore, Gilgit, Hunza-Nagar, Ghizer and Ghanche has damaged 219 houses, six power stations and three bridges. There were also reports of damage to road networks and water channels. Diamer areas of Buner, Niat and Fairy Meadows remain cut off, as do Hispar in Hunza-Nagar, Kharmang and Shigar in Skardu, and Thalley, Hoshey and KirisParal in Ghanche.

So far, however, Balochistan has reported the most deaths, with as many as seven people killed and eight injured in various rain related incidents. Rains also damaged 106 houses in the province, with some areas rendered without access to power.

The heavy rains started falling on July 15, and continued over the next week throughout the country, causing some urban flooding in Lahore, Islamabad and Rawalpindi, the Pakistani Red Crescent said in a statement.

Deadly flooding is common in Pakistan’s monsoon season, which runs from June to September. Last September dozens of people in Punjab and Kashmir were killed when flash floods caused their homes to collapse.

In 2010, the worst floods in memory affected killed more than 2,000 people, with damage to infrastructure running into billions of dollars, and huge swathes of crops destroyed as a fifth of the country was inundated.