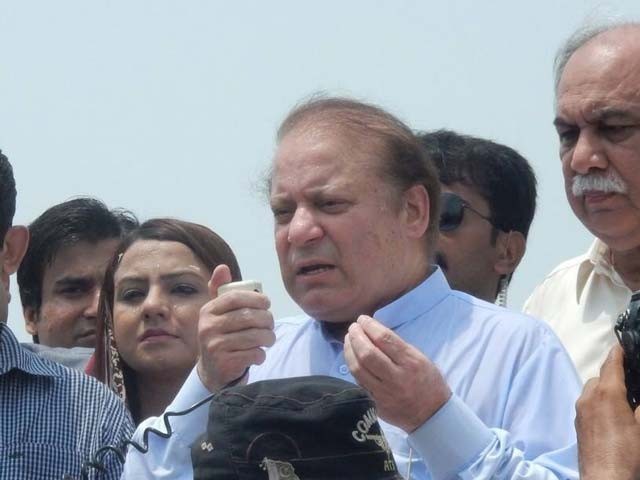 “It is not torrential rain but the melting of glaciers that caused the floods,” the premier said, after receiving a briefing by the district’s coordination officer in Chahran area, Express News reported.

“Due to a lack of rescue boats, the situation has become worse for stranded people,” the premier said adding, arrangements for rescue boats should have been made.

Further, the premier assured the people of the district that rescue teams are prepared to tackle the situation. PM Nawaz also commended rescue teams for their efforts to provide relief to evacuated people and rescuing those still stranded in the affected areas.

Earlier, the DCO apprised the Prime Minister that 56,000 people have been affected by the flood in four tehsils of District Rahim Yar Khan. The most affected tehsil of the district is Liaqatpur, Radio Pakistan reported.

“21 flood relief camps have been set up in the district to cater to them while 34,715 people were shifted to safer places.”

He furthered that standing crops of sugarcane, moong and cotton spread over 41,391 acres was affected. “Some 53,809 cattle has been vaccinated against the spread of waterborne diseases.”

Further, a C-130 aircraft carrying goods arrived in Chitral to provided the much-needed relief to the people of the worst hit area by floods.

The personnel conducted the rescue operation in Rambur, Kurggh, Birri, Bumboret and Chashma areas. “17.5 tonnes of ration was also distributed among the flood-hit people,” it said.

It said army engineers restored N-35 road for all sorts of vehicular traffic, whereas Chitral-Buni road was opened for light traffic. “Restoration of roads Chitral-Bubmoret and Buni-Masting is still under way.”

Army set up four relief and medical camps in Shigar, Khaplu and Hisper in Hunza of Gilgit Baltistan, providing cooked food to the flood-hit residents. Further, food was distributed among more than 2,000 families in Waziristan besides providing sufficient quantity of K-2 oil in Khaplu area.

The engineers also repaired 40 kilometer of road in district Astore whereas restoration of those in Hunza, Skardu, Khaplu and Ghanche is in progress.

Troops also rescued as many as 71 people from Jhakr Imam in Dera Ghazi Khan as they deployed boats, Out Boat Motions (OBMs) and life jackets in flood-vulnerable areas of Rajanpur, D.G Khan, Muzafargarh and Layyah

The press release said that in total 13,893 people were rescued, in collaboration with the civil administration, from Rahim Yar Khan, Sadiqabad, Khanpur and Liaquatpur during the last two days.