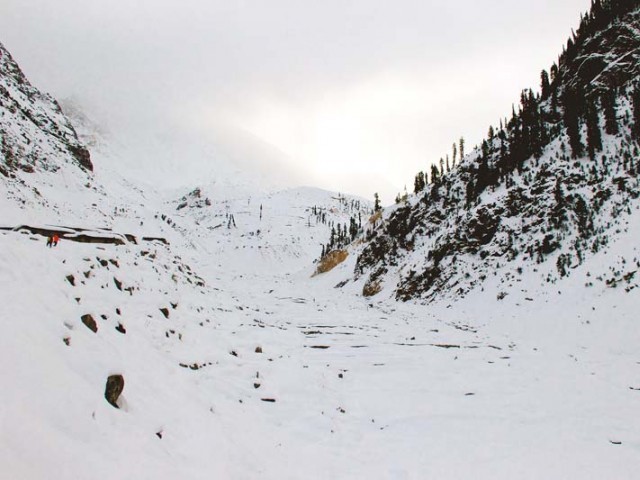 THE FIRST RAYS OF SUNLIGHT ADD A TOUCH OF WARMTH TO THIS OTHERWISE ICY LANDSCAPE. PHOTOS : VASIQ EQBAL

It seemed next to impossible: finding seven days to spare out of a full schedule. However, the plan came through at the eleventh hour. Luckily, my expeditions have always taken place this way, and so I have some experience getting ready for a trip on very short notice. In the morning, I had no clue I would be in Mansehra by night, in the diverse, fine company of trekkers and adventurers. Many of my companions, including our group leader Omar Javed, were from Lahore and our destination was the Naran-Kaghan region in Khyber-Pakhtunkhwa.

We set our sights on Lalazar, but the fantasy and romance of Lake Saiful Malook in the winter was too hard to pass. Lalazar, once famous for its wild flowers, pine forests and lush green landscape, has over the years earned a reputation for its potato cultivation fields as well. An hour by road from Battakundi leads to Lalazar, but there is another approach from Lake Saiful Malook, via the picturesque Hans Gali. The fantasy and romantic charm of Lake Saiful Malook in the winter is too hard to pass up. PHOTOS : VASIQ EQBAL

Lalazar and Lake Saiful Malook are not the only attractions that Naran and Kaghan valleys offer. Only seven kilometres from Lake Saiful Malook there is another tear-shaped lake known as Aansoo Lake. Apart from the Sat Sar Mala Lakes (Chain of Seven Lakes), there are other beautiful lakes in the region such as Lulusar Lake, Ratti-Galli Lake, Dudipatsar Lake and Saral Lake. Babusar Top and Noori Top are two high-altitude trekking destinations in the area. At an elevation of 5,290 metres, Malika Parbat (Queen of Mountains) is the highest peak of Kaghan Valley and is considered one of the most technical peaks above 5,000 metres. In recent years, it has caught the attention of domestic and foreign climbers, and more than a couple of expeditions scaled the summit in 2012.

A festival is held in the region every April, usually in the city centre, celebrating the anniversary of Baba Pir-e-Shah Ghazi Qalandar (Damrian Wali Sarkar), the spiritual guide of Mian Muhammad Bakhsh, the Sufi saint and Potohari poet famous for his masterpiece ‘Saiful Malook’.

This was my first journey to this lake; I did not want to visit in the summer as I’d heard accounts from visitors who said that it is crowded by domestic tourists at that time. Network connectivity, easy access by road and an abundance of civic facilities make the lake an easy and attractive destination even for those who aren’t too adventurous.

From Mansehra we travelled to Mahandri, a market along Kunhaar River. We bought fresh food supplies here and tried the delectable chappal kebab, which beat the chappal kebabs of Takht Bhai in Mardan in every way.

From Mahandri, we journeyed towards Kiwai, where we had some breakfast and found our porters. Our next destination was Naran, but heavy snowfall had blocked the route to Naran for nine kilometres. Thus we had to start our trek from this point, leaving our jeeps behind.

The day we set out for Naran was sunny. The sunlight warmed us just enough to leave us jubilant before we spotted the moon atop the mountains, touching the snow-capped mountains with light. I witnessed the most beautiful sunset I’d ever seen and in that moment, it felt as though all our efforts to reach Naran paid off. After trekking for a few hours, we decided to set camp. A seasoned trekker accompanying us, Javed Mehmood, prepared a delicious meal of biryani. Mehmood knows the northern areas of Pakistan like the back of his hand, and he explained it was the constant travel that taught him to be an excellent cook.

I had first seen an image of hanging icicles in a photography class. I was captivated by the natural wonders, and was determined to see them in the flesh. On the second day of my travels, I came across them when I was least expecting it — inside a shop, frozen on the ceiling. The sun’s rays touched the icicles, and tiny water droplets sparkled on them.

After breakfast, we started our march towards Naran. We crossed the eerie Naran city, which appeared to be deserted. A few locals and a lone dog appeared to be the only inhabitants. By mid-day, it began to snow. Once we reached the point where locals do not venture past, we did not have a trail to follow and thus, had to make our own way. This drained our energy more than we had anticipated and so, we decided to camp near a tributary. We tucked into our dinner, we huddled inside our sleeping bags, shivering in the sub-zero temperature before giving in to our fatigue.

We did not anticipate our third day would be tougher than the preceding two. The day had one mantra: ascend, ascend and ascend. The group was determined to reach the famed Saiful Malook Lake, and so we pushed ourselves to our limits. At several moments, I paused to catch my breath and asked myself, “Had Prince Saiful Malook of the fable undertaken this very same gruelling journey?”

The story of Saiful Malook is a classic, written in poetic verse by Sufi Saint and poet Mian Muhammad Baksh. He wrote in Hindko and the story is part of folklore in the Hazara, Kashmir and Potohar regions to this day. ‘Saiful Malook’ is the title of the poem and the name of the main character, a prince. According to the fable, the prince fell in love with a fairy named Badi ul Jamal. He then dreamed that a dervish guides him to look for the fairy near a lake. The prince travelled to the lake and spent 12 years waiting there for the fairy, before he finally met her. By afternoon, the warm sun disappeared behind the clouds and, when we were tantalisingly close to the lake, it began to snow. Within a short span of time, we were knee deep in the snow. Perhaps Lake Saiful Malook did not wish to reveal its beauty in its entirety to us on that day, and we could only catch a few minutes by the lake before we had to turn back. By night, a blizzard ensured we could not see beyond six feet and we laboured to keep moving. Then, just as suddenly, the wind died down and the moon shone through the clouds, a beacon atop Malika Parbat. The moonlight was so bright, I turned off my head lamp, continuing my walk in silvery light.

It can take an hour to travel the nine kilometres from this point to Naran town in a jeep. However, when travelling knee-deep in snow, it can take almost a day.

By 7:30pm, we heard the noises of creatures around us and spotted gleaming eyes in the dark. Unable to determine if these creatures were friendly, we doubled our efforts to walk further, fuelled by fear of the unknown. By 9pm, we were safely tucking into our dinner before we slept deeper than we had ever done before. We dreamed of new destinations and journeys, of places to explore and new people to meet. We dreamed of making memories just as beautiful as the ones we made on this trip.

Vasiq Eqbal is a Lahore-based photojournalist and a travel writer.
He tweets @vasiq_eqbal