BBQ Tonigh­t has become a very popula­r venue for people from all walks of life.
By Momina Sibtain
Published: December 19, 2010
Tweet Email 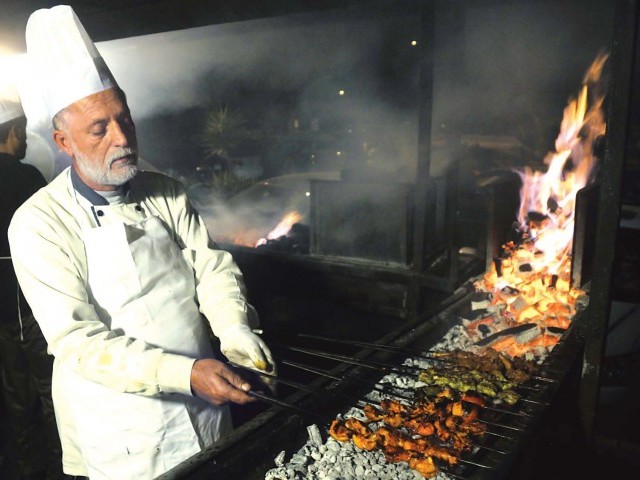 The chef grills chicken to perfection at the much famed barbecue hangout. PHOTO: THE EXPRESS TRIBUNE

ISLAMABAD: BBQ Tonight is a familiar name in the Pakistani restaurant business. Acclaiming success on the basis of their high quality and not-too-hefty prices, BBQ Tonight has become a very popular venue for people from all walks of life. Starting off as a roadside restaurant in Boat Basin, Karachi, Sardar Qayyum could never have imagined his small barbecue-joint would become one of the most popular Pakistani restaurant across the country.

Around 21 years ago, in 1989, the Sardar brothers started it off as a small shop in Karachi. Due to their flavourful menu and good quality of food, the small shop eventually expanded into a four-storey complex with an open air rooftop garden. Soon after, the success of BBQ Tonight travelled up north to Lahore and Islamabad.

Opening up in Lahore near Hussain Chowk, the restaurant was an instant success and added a new avenue for the office-goers, providing them an affordable option for lunch. Now, with the family running the chain in Lahore and Karachi, Islamabadis were feeling left out. This was when CEO BBQ Tonight Islamabad Israa Wassay approached the owners and suggested that an Islamabad branch be opened.

For the first time, due to the immense work load of Lahore and Karachi, the owners leased the franchise to Israa Wassay to open up a branch in Islamabad. After its initial launch in October 2008, BBQ Tonight has become the largest restaurant serving Pakistani cuisine in Islamabad with a capacity of 280 people.

Wassay acknowledged upon talking to The Express Tribune, “I remember going to BBQ Tonight even when it was not opened here. A trip to Karachi was never complete without eating the delicious BBQ.”

“It is very close to my heart and therefore when I got the franchise I worked extra hard to make sure that the standard and the quality of the food was at par with the Karachi outlet,” he said.

Sending her kitchen and managing staff to Karachi for training for five months before the launch, Wassay was ready to hit the Islamabad market with a bang. Investing family money and taking out a few loans to start up the venture, Wassay has not only surpassed her initial debt but has also expanded the domain of her expertise to catering private and corporate events.

“For me quality control is most important and for that I ensure that no leftovers from one night are ever reused,”
she said.

“With the recent inflation in the prices of raw materials, BBQ Tonight has surprisingly not incurred any losses because of wastage control,” she added.

The prices for the Islamabad franchise are controlled by the Karachi head office. Since it prides itself in not being a high-end elite restaurant, the management tries to keep the prices affordable.

Hard work and quality control has made it possible for a small time roadside restaurant to become one of the largest Pakistani restaurants in the country. Wassay despite having three children of her own and a family to look after, has made Sardar Qayyum’s dream a reality in Islamabad.

The fighter: A dream that will never end