Kit Harington to return in 'Game of Thrones' season six?

Which Facebook friend deleted you? Here's how you can find out

These pictures of K-2 will leave you stunned PICTURE COURTESY: MIRZA ALI TWITTER
Pakistan’s northern regions are home to one of the most breathtaking and highest summits in the world, including the second highest peak in the world, K-2.

The beauty of the region has been perfectly encapsulated by images shared by Samina Baig, the first Pakistani woman and the third Pakistani to climb Mount Everest, shared images of her recent expedition to scale K-2.

Here are some of the images shared by Samina's brother, Mirza Ali, who is part of the K2 expedition.

Night in Chilas we stopped for photos at #Nangaparbat view point ,next stop junction point and Skardu tonight pic.twitter.com/pDONlpLXRn

Finally after two days of road ride on Karakorum high way ,we are in Skardu ! pic.twitter.com/tZWJXUYElm

Jeep ride was bumpy & switched car due to broken bridge ,Now in Askoli! Moon rise &The moonlight is unbelievable !! pic.twitter.com/YcPio7vEKg

Samina along with her brother are all set to reach K2's summit in the coming days.

Trekked from jhula to Paiju,#extremly hot though not like yesterday ,go heat struck yesterday! Had 1st view of #k2 pic.twitter.com/m4dNYaWOV7

Decided to sleep under the stars and talk to stars&snow caped mountains ! Refresh my mind and thoughts!#nature #pure pic.twitter.com/SKpWb0IXRC

Surprise encounter with my partner in climbing crime! Arshad came all the way from base camp to Paiju!Now in Ardukus pic.twitter.com/RGyJYb6StU

The 1st sight of the mighty #K2 &#broad peak from #concordia !traveled around the world bt this place is matchless ! pic.twitter.com/KV1vZW6BgX 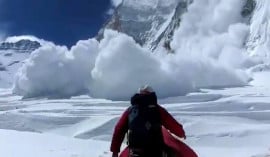 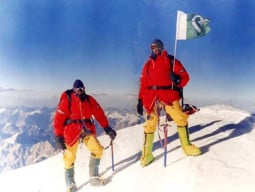 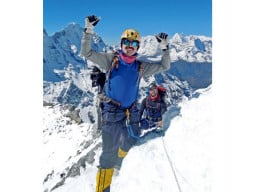 Sane Khan | 5 years ago | Reply Absolutely stunning...
Replying to X
Saved ! Your comment will be displayed after the approval.
Error !
Error! Invalid Email.