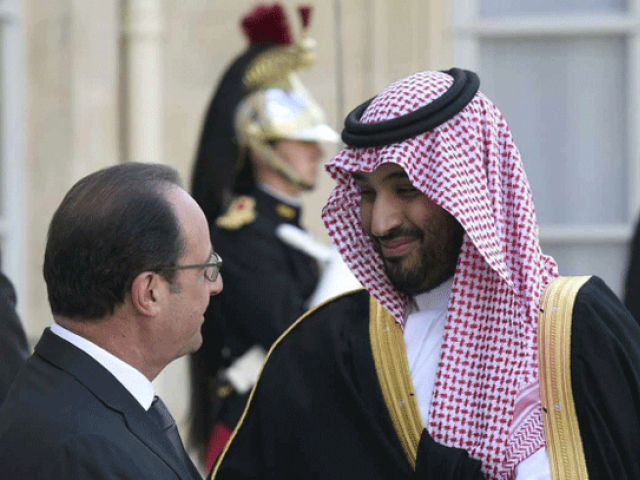 RIYADH: Saudi Arabia is pursuing its own nuclear projects and building alliances to counter Iran, which is days away from a potential atomic deal Riyadh fears could further destabilise the region.

The United States and other major powers will hold weekend talks with Iran in Vienna, aiming to finalise by Tuesday an agreement to prevent Tehran from getting a nuclear weapon.

Gulf states led by Saudi Arabia, the world’s top oil exporter, have concerns that Iran, Riyadh’s regional rival, could still be able to develop a weapon under the emerging deal to end 12 years of nuclear tensions.

They also worry Washington is not taking their concerns about Iran’s “destabilising acts” in the Middle East seriously enough.

On Wednesday, France and Saudi Arabia announced a feasibility study for building two nuclear reactors in the kingdom.

Like its neighbour the United Arab Emirates, Saudi Arabia wants to diversify its energy sources and has plans for 16 reactors.

The Paris pact is the third nuclear accord Riyadh has signed this year.
Last week, it reached a deal with Russia on economic, technical and scientific ties for the peaceful use of atomic energy. In March, the kingdom signed a preliminary deal for nuclear cooperation with South Korea.

“Saudi Arabia is going big with its nuclear project,” said Jamal Khashoggi, a veteran journalist and an analyst who is linked to the royal family.

“Of course officially it is a peaceful project”, but the nuclear know-how could also be used to develop weapons, he said.

In March, Prince Turki al-Faisal, the kingdom’s former intelligence chief, told the BBC that whatever Iran is given under a deal with world powers, Saudi Arabia and others will want as well, potentially sparking a regional nuclear race.

Under a framework pact agreed in April, Iran will reduce the number of its nuclear centrifuges for enriching uranium, in return for a lifting of international economic sanctions.

Iran says its nuclear programme is peaceful but if Saudi Arabia feels the Iranians are continuing their quest for a nuclear weapon, Riyadh will have “no option” but to pursue its own deterrent policy, Khashoggi said.

Riyadh has both “the will and the ability” to produce nuclear weapons, Saudi analyst Nawaf Obaid, a visiting fellow at Harvard University’s Belfer Center, wrote on CNN.com last week.

But a Saudi official told AFP the kingdom “won’t take the risk” of seeking an atomic bomb.

He said Iran’s policy of “interfering” in Syria, Iraq, Yemen and Lebanon poses danger, regardless of the weapons it possesses.

“I believe much of the talk about Saudi interest in nuclear weapons is posturing,” said Mark Fitzpatrick, director of the non-proliferation and disarmament programme at the London-based International Institute for Strategic Studies.

He said their capability is still “rather low” and a better way to enhance Saudi security options is to partner with various Western nations.

“The French reactor deal provides another means of reassurance from Western partners of attention to Saudi interests,” Fitzpatrick said.

The nuclear agreement was among investments totalling about $12 billion finalised during the Paris visit by Deputy Crown Prince and Defence Minister Mohammed bin Salman.

Improved links with France highlight a deepening of ties between the Gulf and major powers beyond the region’s traditional ally the US.

Fitzpatrick said there is still huge distrust between Washington and Tehran but they will now have channels of communication, “which is of legitimate concern to Saudi Arabia.”

Salman’s Paris mission came a week after his trip to Russia where a military pact and several other agreements were reached alongside the nuclear deal.

But an editorial in the Saudi Gazette said cooperation between Russia and Riyadh will ensure “national unity and security” for both of them.

The kingdom “has to pursue its own security independently,” and cannot take American guarantees for granted, Khashoggi said.

“We are very worried about the Iranian expansionism…. The Middle East is falling apart and no one is helping to put it back in order. Saudi Arabia somehow is dancing alone there.”