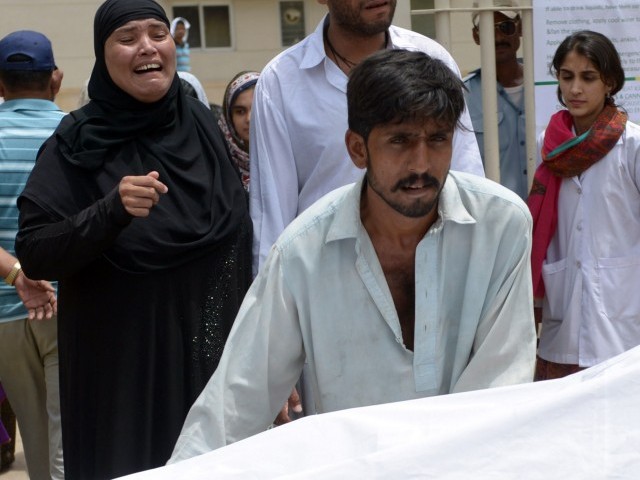 Relatives mourn the death of a heatstroke victim outside a hospital in Karachi. PHOTO: AFP

KARACHI: The death toll from the worst heat wave to hit Karachi for nearly 35 years surpassed 1,000 people, as experts warned of another similar heatwave in the metropolis in the coming week.

The heat wave in the city of 20 million people coincided with severe electricity cuts, leaving many without fans, water or light, and the beginning of the holy month of Ramazan, when many Muslims do not eat or drink during daylight hours.

Read: No mercy: After morgues, city runs out of funeral vans

Some shops have refused to sell ice or water during the day, citing religious laws that mean they can be fined. It is also illegal to eat or drink in public from dawn to dusk.

An influx of bodies into the morgues has forced medical officials to store bodies in body bags on the floor, said Anwar Kazmi, a senior official of the Edhi Foundation.

Air conditioning units at the morgue have stopped working. The provincial government had done little except try to blame others, he said.

“We pay tributes to the doctors and staff of the government hospitals who are working tirelessly treating endless number of patients,” he said.

“The Sindh government has done nothing except blaming K-electric for the deaths.”

K-electric says illegal connections are overloading the lines and demand has surged in the heat. The government owes more than $1 billion in unpaid bills, K-electric said.

Temperatures shot up to 44 degrees Celsius (at the weekend, although they have since dipped to 38C. The meteorological department said the weekend was the hottest since 1981.

Forecasters have been predicting rain for days, but there has been no significant fall. “The death toll from the heat wave has now crossed over 1,000 mark. These deaths have mainly taken place at government-run hospitals and few major private hospitals,” Kazmi said.

“There are lots of unreported deaths at small private hospitals.” Many hospitals issued urgent appeals overnight for bed sheets, cold water and other basic items.

A fresh heatwave is likely to hit Karachi next week, with the maximum temperature expected to reach 42 to 43°C.

Touseef Alam, former chief meteorologist of the Pakistan Meteorological Department (PMD) in Karachi, told The Express Tribune that the intensity of the fresh heatwave could be similar to the prevailing one. “Relief efforts should continue with the same pace even if the city receives rain.”

Read: Govt mulls use of cloud seeding technology for artificial rains in Karachi

PMD meteorologist Rashid Bilal said wind reversal had started from sea to land in Karachi, which would help maintain the mercury level in the city for a few days. Around 100 heatstroke centres have been set up across Karachi by different organisations, 42 of which have been established by the KMC.