No mercy: After morgues, city runs out of funeral vans

No mercy: After morgues, city runs out of funeral vans 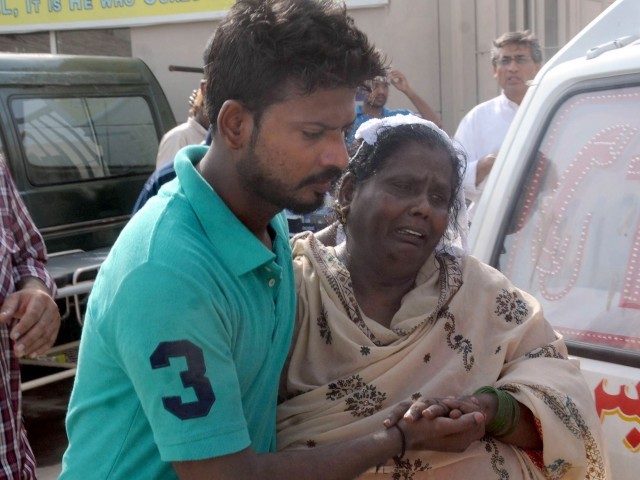 Not even in his wildest imagination would Manzoor Israr, 35, have thought that his bier would be carried to the graveyard in a food delivery van. After his death on Tuesday, it did.

Israr used to supply water gallons on Tariq Road until the day he succumbed to the deadly heatwave in the city. According to one of his relatives, Arsalan Ali, not a single funeral van was available to transport Israr’s body to the graveyard, which is why the family ended up carrying the corpse in a Suzuki food delivery van.

The dilemma didn’t end there. When the funeral procession reached the Muhammad Shah Graveyard in North Karachi after the Taraweeh prayers, the gravedigger kept them waiting almost for hour. “The gravedigger wasn’t present in the graveyard when we reached,” said Ali. “He charged us Rs15,000, after a long deliberation on the rates.”

Making money out of the heatwave

The deadly heatwave that struck the city from Friday gave birth to a new menace in the city: the graveyard mafia, which is yet another group beyond the control of the government. With hardly any funeral vans to go around, grieving families have been left at the mercy of gravediggers who are charging amounts as they please.

Read: Fatal heatwave: Karachi running out of space for the dead

Israr’s case was not the only one. The body of an elderly woman, Ayesha Shakir, who died on Tuesday morning, reached the graveyard in a public bus. According to her nephew, Faraz, there wasn’t any funeral van available in the city. “We reached the graveyard after Asr prayers and the gravedigger was absent,” he said. “He kept us waiting till Maghrib and started digging the grave after the Maghrib prayers.” He was probably too tired, as according to Faraz, his aunt’s grave was the 65th that the gravedigger had been digging that day.

One of the gravediggers of the Muhammad Shah Graveyard, Bilal, told The Express Tribune that they start digging up the grave after Fajr prayers, considering the number of bodies coming each day. “Even today, 35 bodies have arrived since morning to be buried and 10 more have yet to come,” he said.

He complained that it was not possible for three gravediggers to dig as many graves under the blistering sun. According to him, they are charging between Rs12,000 and Rs15,000 per grave as the prices of the blocks, slabs and cement have soared in view of the huge number of casualties in the city.

Talking about why they keep delaying the burial, he said that they have to obtain all the necessary equipment from Manghopir. “We are human, too, and it’s not easy digging such a large number of graves at one time,” he said, while working on a burial pit. “I am not charging any unjustified money.”

The gravedigger at Sakhi Hassan Graveyard, Manzoor, told The Express Tribune that there was no space available in the necropolis for more graves. However, he revealed that there could be exceptions. “We can arrange a grave by moving the existing ones,” he said.

While no representative of the Karachi Metropolitan Corporation (KMC) was available to talk on the situation after repeated calls, commissioner Shoaib Ahmed Siddiqui maintained that the government has no funeral vans. “Private welfare organisations have funeral vans and they are helping the public,” he said. He added that as far as he knows all the graveyards of the city under the KMC were providing services free of charge.

Up in flames: Fire erupts at godown in Shershah